The best way to propagate moss is by taking a larger piece and dividing it into smaller pieces, then transplanting them apart from one another and encouraging them to grow together. Once moss has covered a surface it will begin adding new growth in the form of thickness, essentially growing on top of itself. While this mature thick growth is ultimately the goal and offers the best weed suppression, it does not maximize their spreading. If you are trying to increase coverage then dividing will speed the process. 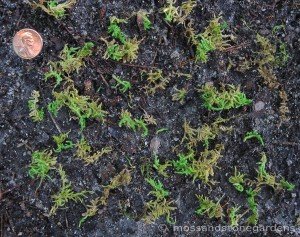 To ensure the highest level of survival, larger divisions offer stability and control. These divisions could be as small as the center of your palm. Even smaller divisions are called fragments and offer the greatest expansion but the loose pieces are more difficult to confine. The size of the fragments are best if kept larger than 1/4 inch, the smaller the fragments the longer it will take to establish and fill in. Pinching and pulling to tease apart sections is preferable to using scissors or other instruments. One square foot of moss can be effectively spread to cover up to 20 square feet. Mind you this degree of fragmentation is extreme and may take several years to fill in.

The tearing and shredding to divide or fragment signals the moss to begin new growth. The first order of business for the divisions or fragments is to re-anchor themselves to the substrate. Until new rhizoids have formed, leafy growth will not resume. In order for a rhizoid to develop, the fragment or stem of the moss must be in contact with something. Rhizoids do not reach out to attach themselves by first growing into thin air and then happen upon a surface to connect with. Instead, they form on the stem when in contact with something.

Any part of a pleuro is viable for regeneration. The larger the fragment the more quickly it will recover. Very small fragments (less than 1/4 inch) are likely to revert to a younger state of maturity called protonema. This fragile state is where the moss acts like an alga, and grows more like a film on the surface. Protonemal mosses are more likely to perish if they become dry and may take many weeks before developing into a mature gametophyte (fully developed moss with leaves).

Acrocarpous mosses that have been fragmented may need 6 months or more to anchor themselves and another 12 months to multiply. Since acrocarps spread by the growth of new individual upright stems, the pace of their spreading is slower. Since most acrocarpous mosses require periodic dry periods, they cannot stay in a growth mode everyday like pleurocarps.

The growing tips or outer layers of Acrocarps are more readily regenerated than the older lower parts of the stem. When fragmenting acro’s, be sure to crumble or cut the growing tips with scissors. Simply separating the stems will leave them less able to orient themselves upright and create new rhizoids.

Fragmentation should be done when the moss is dry. In their desiccated state, they have prepared themselves for possible damage, storing a small amount of protein that can be used to repair any cellular damage once moisture returns.

Spread the fragments onto a prepared and lightly scratched soil, water enough to wet the top inch of soil and then press them firmly, re-compacting the soils surface. This will provide good contact with as much surface area of the fragments and promote rhizoid formation. Compacting also acts to trap the fragments between soil particles keeping them from blowing away. Water the fragments 1 to 4 times a day depending on the conditions and occasionally walk on them to keep their contact with the soil.

Divisions can be held in place by netting, toothpicks or greening pins. Toothpicks can be inserted at opposite angles to work in unison with one another. Acrocarps are better held in place with netting. Securing moss divisions in place is useful for areas with water run-off or gusty winds. Securing also prevents unnecessary disturbance which can disrupt rhizome development.