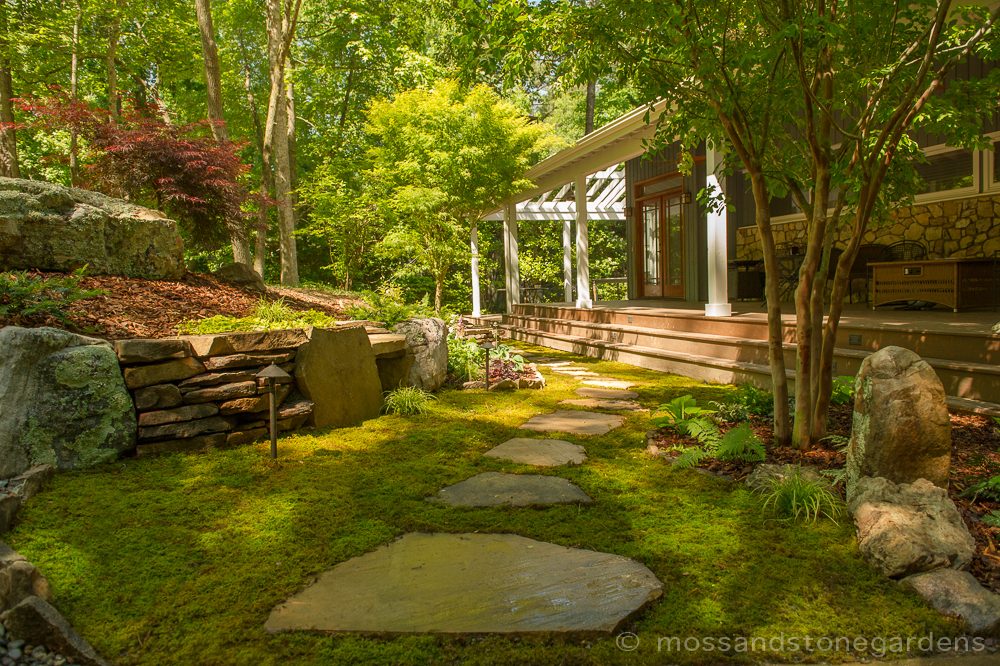 Sometimes the stars align just right and a client’s existing property features, our collective visions for improvement and a sky’s-the-limit budget all fall into a state of moss-induced bliss. Sometimes, but not always. That’s where a new kind of alignment and yes, the fun, begins.

Often we’re called in because, in fact, the client’s existing property features are a major challenge and a testament to failed endeavors (they’ve spent a whole lot of money on planting, fertilizing, weeding and fretting over failed grass areas etc.) or, they really don’t have any idea of what to do with that barren shady section of their yard. Sometimes we’re met with someone brimming with a whole lot of ideas but not much budget. Did I say this is where the fun begins? Yes and it really is as we collaborate together to find that perfect balance of terrain, resources and dreams. The results? As it turns out we can whip some of those wayward stars right back into alignment, thank you very much. Hello segue!

We have lots of “star stories” borne of one or more of these challenges. Here’s a short one for you…

Recently, a client gave us open season on the creative vision and a generous budget so wow what could go wrong? Oops, the tree guys, that’s what. Between our first and second site visits the tree team showed up and the nice shady glade I first saw was now not so very shady.  (Oh, that lovely cherry tree. I still mourn your loss.)  Solution? A one hundred gallon (and spectacular) crepe myrtle (Lagerstroemia ‘Nachez’) supplied instant shade. Project back on course but at an unexpected adjustment to the budget.

Fortunately our client was committed to the original mosssome vision and agreed to the additional cost necessitated by the oops factor! 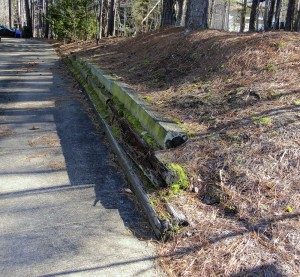 While we had lots of creative license, it turned out Barbara, the home owner, deeply loved some beautiful but not so stable timbers retaining soil on both sides of the driveway.  In fact those rotting, yet visually pleasing, timbers were the basis of her whole inspiration for calling us. Why did she love them so? Take a look and it will be obvious to you. They were covered in velvety layers of Dicranum mosses. What’s not to love?

Barbara is a renowned photographer and artist with a particular passion for color. As it turns out, green is her favorite. The mosses that populated her rotting timbers inspired her but hey, the timbers were no longer doing their job which was to act as a retaining wall. They had beauty but, sorry Barbara, they simply had to go. Could they go and the mosses stay, she asked? 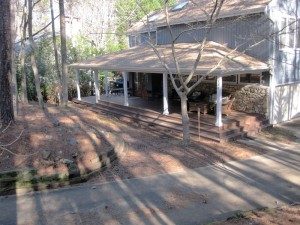 Our vision evolved from there to incorporate the beauty of the mosses with a more stable solution for the retaining wall. Yes, she could have both! We started with the possibilities of rebuilding the timber retaining walls, setting them further back to allow for a wider driveway and preserving any of the existing moss growth into the new landscape. It soon became apparent that Barbara was interested in a panoramic surround of verdant green hues to inspire her creativity as she worked from inside her large-windowed home. Our kind of office! She also was interested in low maintenance. The stars are in their heavens and all is right with the world.

After we discovered that Barbara and her husband David were not gardeners, and challenged by the care of their four houseplants, we knew that moss and stone would be the ideal landscape components for them. We used large boulders around the property to diversify and  bring strong visual impact to the woodland lot.

Moss, maples and stone would make this landscape shine bright.

Boulders were placed either side of the driveway entry, incorporated into the retaining wall and one very large boulder placed in the middle of the front yard which had been left natural.

The massive stones weighed a total of eight tons which brought the installation into scale with the rest of the yard. We transitioned one of the timber retaining walls into a stone wall as it rounded toward the house. Next, planting beds were created at the base of the stone wall and  the sloping ground was leveled for the stepping stone pathway. We transplanted Thuidium delecatulum moss as the ground cover and reused Barbara’s existing mosses into a little pocket garden on the opposite side of the driveway. Three specimen Japanese maples (Acer Palmatum ‘Bloodgood’, Acer Palmatum ‘Viride’ and an upright Acer palmatum dissectum ‘Seiryu’) were incorporated as well as some simple under plantings, lighting and irrigation.

Next article Moss Trending: The Signature of All Things by Elizabeth Gilbert