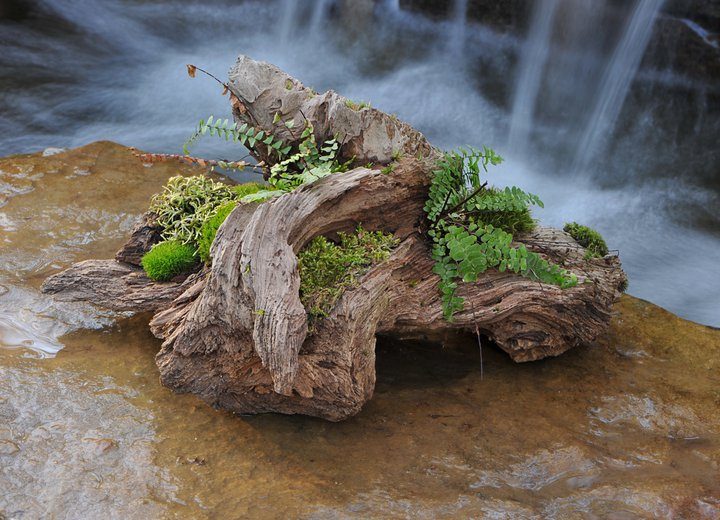 Time twisted, rounded, knotty growth, creates the base of this root burl, moss and fern planter.  Crevices and craters cover this found relic of an old oak tree, inviting moss and ferns to creep deep within.

David Spain, co-owner of Moss and Stone Gardens , created this moss art.  When talking with David about this piece, he says, “One of my favorite mediums for mosses is wood, and finding an interesting relic from a tree is pure gold.”

As you can imagine, these beautiful burl’s can be difficult to find but David’s dedication to moss art calls him to the woods in search of decaying tree parts.  According to David, “The trick is finding a burl root, or the heart of a decaying tree that is much denser than normal branches. They are often what’s left lying on the ground after the softer parts of the tree has decayed over decades.

The uniqueness of each piece of burl was made from exposure to the natural elements.  “These burls are similar to driftwood but have been developed by erosion and insects instead of wave action,” says David.

When David created this moss piece, his vision was to create what might be found in nature.  His goal was to create a piece, “Perfect to seamlessly blend with a native garden  or to bring indoors as a natural accent to a more formal setting.”

Prior to planting, the wood required no special treatment other than a strong spray wash with water to remove any loose material.

When David created this piece of moss art and in keeping with his unique style, he inoculated tiny colonies within the crevices and craters, to, as he says, “Jump start their natural spread over time.”

Now with added purpose, as I hike my woods, I will be keeping a keen eye to the ground in hopes of finding a piece of burl to build similar art of my own.