The Moss Farm at Moss and Stone Gardens, Raleigh, NC 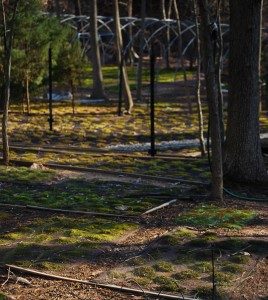 At noon, when I pulled into the driveway of The Moss Farm, in Raleigh, NC, the newspaper still sat by the curb.  Moss does that to you; the news of the day can wait until solitude and serenity from the moss garden recharges your soul.  It’s best to begin the day with moss mellowing one’s mood, making it more tolerable to read what’s above the fold.

The air is warm as I enter the sun drenched front garden of The Moss Farm.  Immediately, I’m drawn to the moss garden on the side of the property.  Rushed, yet focused on tasks at hand, I take a step into the moss garden and most of must-dos for my busy day, melts away.  A mere step into the dappled shade from newly leafed trees, protecting the moss floor, and I am transformed.  Moss is the only thing now on my mind.

I pause at this first step to take in the view.  The design is such so the view is not taken in all at once.  As I surveyed the scene, I heard the sound of music — tranquil music.  I wondered if was playing as I walked up or did I somehow trigger a switch with my first step.  From this gardener’s perspective, the music was the perfect match to moss.  If I was a musician, no doubt, I would find the moss a perfect match to the music.

Further steps revealed the garden slowly.  I’m lost in the seductive scenes.  Just as I’m about to take my next step, David Spain and Ken Gergle, co-owners of Moss and Stone Gardens greet me with smiles.  As if they could read my mind, they let the moment linger.  They know I’m lost in my thoughts.  After a moment, we hug our hellos and they prepare me for a tour of The Moss Farm; first of the demonstration gardens, then the farm itself. 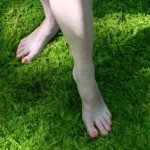 Patricia Spain allows the moss to touch her toes. With a lifetime of experience with moss, she is able to somehow control the moss’s magical hold

moss.  I declined with no explanation.  I wasn’t ready for that.  I was already too vulnerable.  I wanted to be able to keep my wits about me.  I knew if my toes touched the moss, I would loose my focus even more than I already had and would delve into fantasies of ancient lore.  I couldn’t be tempted; after all, I was there on business.  Perhaps another time when I’m there on a social call.

David explained the work planned for the gardens before he will allow them presented for magazine publication.  I understood.  David is building a garden that will last a lifetime; there was no need to rush the exposure.  Still, the gardens certainly could be photographed today for any of the finest publications.  David, however, is a perfectionist. He will let me know when it’s time.

From the demonstration garden, we walked down to the fields of moss.  Fascinated by how the mosses were sequestered and grown on landscape cloth, I found each area with a separate, sustainable crop.

The mosses grown in The Moss Farm are for purchase by individuals, used in The Moss and Stone Gardens dish designs, as well as, used in the landscape designs David and Ken are so highly respected and known for.  The tour left me even more committed to learning about mosses.

Hours later, I had to regain my composure to re-enter the world of appointments and commitments.  I was afraid it would be difficult to do, but I stepped back into the sun drenched front garden and my normal hectic pace returned.  It’s as if the spell of the moss’s magic released her hold.  Indeed, even the sound of the music was gone.  But then driving to my next appointment, as I entered into the busy traffic, my mood was mellow; a mood entirely different then on my drive to The Moss Farm.  Moss mellowed me.  I left the Moss Farm a little less stressed about my everyday worries.