The Peeps Picnic at The Moss Farm – Spring 2011

For 87 years, peeps have gathered at The Moss Farm for their spring revival.  The three-month event begins the day after Easter when the peep population is at it’s lowest.  Fellow peeps gather to morn the loss of their peeple, gain knowledge from their teacher, The Learned Old Frog, and to mate for purposes of rebuilding their population for next year’s sacrifices.

It took a while, but peeps have submitted to their fate of being eaten in an annual ritual during the Easter season.  In the name of goodness, each year, millions of peeps, travel bit by bit, into the bellies of children around the world.

Mostly consumed by kids, however, some adults will sneak into the closet for a taste of goodness only found in a peep.

Most children perform the sacrifice the same; starting with one ear, they gnaw it off a the base of the scalp.   Satisfied, the child goes to the other ear.  Some kids like to eat the head with the ears still attached.  If the peep had a say in how it was to be eaten, they would unanimously tell you, this is their preferred method of being consumed.

Bred to die, peeps can accept this annual sacrifice; but the sound of children groaning pleasurably at the taste of their sweet peep marshmallow life blood, is too much to bear.  At least, The Learned Old Frog will tell them, children rarely begin eating peeps from the bottom.  When kids begin with the ears, this allows for some dignity, at least.  Starting at the bottom would be too much for a peep to bare. 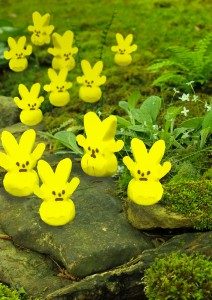 For a period of time, many peeps were not happy with their station in life and they raised up their little arms in the air in protest to this annual sacrifice.  Their voices largely went unheard.  In fact, many will tell you, but The Learned Old Frog denies, people punished peeps for 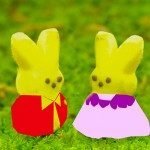 their uprising by dressing them in human-like outfits — party dresses, bunny decoys, even as fairy princesses — a practice males found to be particularly undesirable.  Peeps prefer being nude; after all, they were born that way.

As the years passed, peeps once again began to acquiesced.  This was done, in part, due to the sage guidance from The Learned Old Frog.

All the peeps that were not chosen for this year’s sacrifice, made the long journey to The Moss Farm.  Thousands gathered and each will have an opportunity to speak with The Learned Old Frog.  This (along with the mating) is much anticipated.

Because of the current economy, the numbers of peeps returning this year are low.  A 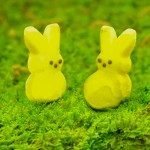 bargain compared to chocolate, more peeps were sacrificed this year than in the last two years combined.  Much work will be needed this year for peep repopulation, ensuring enough peeps for next year’s sacrifices. 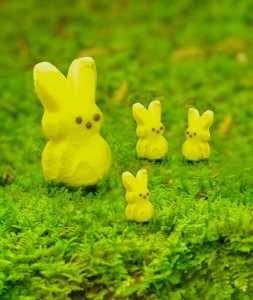 Peep gestation period is a mere 3 days.  Given this, negative peep population growth is never at issue.  Even if the economy continues to lag, resulting in a peep high demand, there will always be enough peeps to satisfy the children during the Easter season.

AT THE GATHERING PLACE 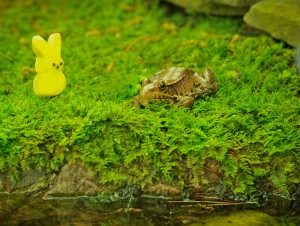 Ada, was the first to meet with The Learned Old Frog.  She arrived early, since she didn’t have far to travel.  When she met The Learned Old Frog along the water’s edge, she was concerned.  He did not look well.  Then she remembered how tired he must be, knowing the gnomes began their travel season and they can be so inconsiderate of other world wonder’s needs.  Often, the gnomes will work and worry The Learned Old Frog beyond an acceptable amount. 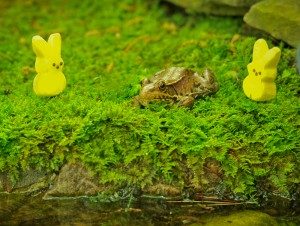 Typically, each peep meets alone with The Learned Old Frog to receive guidance, including who they will mate with during the event.  Peeps are not monogynous.  Even still, they are not allow to choose their own mates.  The Learned Old Frog chooses for them.  He personally likes to introduce mating peeps, to thank them for their service, and to discuss the terms of the mating.

Non peeps are not privy to know how peeps mate.  It is believed by many, they are just born. It’s best to protect their mating rites for fear other world wonders would want to interfere.  At least, from what most people understand, they do nothing kinky as compared to those rascally gnomes.  Still, outsiders are best to believe peeps are just born.

The number of mates that are chosen depend on how much the population needs rebuilding.

During the journey, many speculated on the number pairings there will be.  Most consider it a good year, if they are able to mate 6 times or more.  Of course there are always peeps wishing for at least 12 pairings.  There are also a few who wish to mate with a peep they met along the journey’s path.  This is where hard feelings come to play. Inevitably, someone’s feelings will be hurt.  The same ole love story, you met a peep, life is short, let’s live for today.  But, this is considered bad form in peep morals.

THOSE DUCKS ARE BACK!

After each peep meets with The Learned Old Frog, they head to the watering hole for a cleansing.  As they gather there, they realize those dang ducks crashed their revival — again.  At first there are a couple of pink ducks, then more begin to arrive. 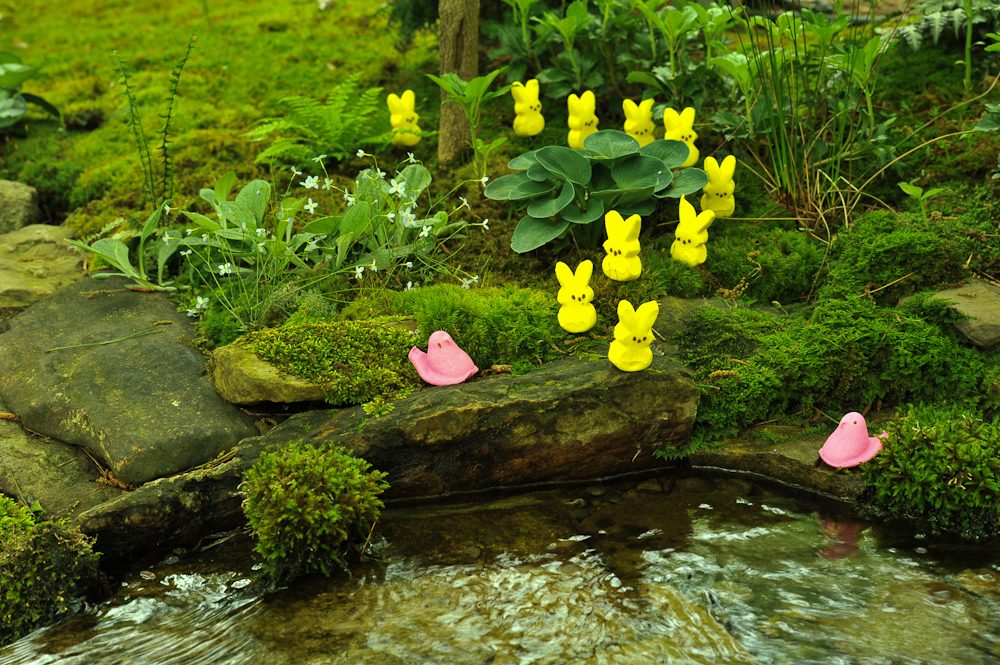 They did this last year too.  Those ducks have issues.  Always trying to gain the respect of The Learned Old Frog as world wonders.  They tend to copy peeps in hopes of being noticed.  They even offer themselves as a sacrifice to kids during the Easter season.  Hump, they aren’t even original.  Even the kids aren’t interested.  Seriously, what’s up with the umbrella in a shade garden?  There they go acting all uppity.  Just look at them, they act as if they own the watering hole.

That lone purple one is trouble.  Last year, when the peeps were entering the water to get their cleansing, he heckled Eli about his little ears.  Thankfully, Eli was sacrificed so as not to endure this kind of behavior again.

Ducks are interesting.  They all start out pink and turn purple then blue when they’ve gone completely bad.  While they are in the purple stage, they are annoying, but not dangerous, like they are when they are blue. 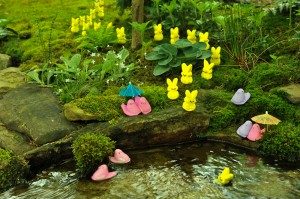 In the meantime, Luther is the first to jump in the cooling, cleansing water at The Moss Farm, followed by Nettie.  Even though each pairing was announced by The Learned Old Frog, and Luther and Nettie were not paired together, it was obvious to everyone, they had an eye for each other.  They were starting to cause some concern from the elder peeps with their behaviors toward each other.

Every year, there are a few renegade peeps wanting to do their own thing. 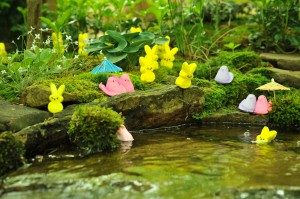 Noticing their coziness as Luther cajoles Nettie into the water with his playful way, Gladys goes to the water’s edge to make sure there are no casualties down the waterfall.

It is well known, peeps that take matters into their own hands will escape down the falls and couple in Mellow Yellow.  Sadly, many a peep was conceived that way. 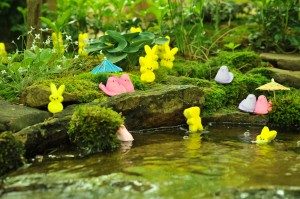 Gladys has held this role for years, as did her mother before her.  Situating herself in a decent spotting perch, she hopes nothing bad happens on her watch.  She is lightly humming a tune thinking about her 9 pairings — yes 9!  She can hardly contain her excitement when Luther takes the plunge.  Drats!  “Why does this have to happen to me,” Gladys shouts.   Nettie begins to swim towards the waterfall so she can be with Luther.  No doubt, they are on their way to Mellow Yellow for a tryst. 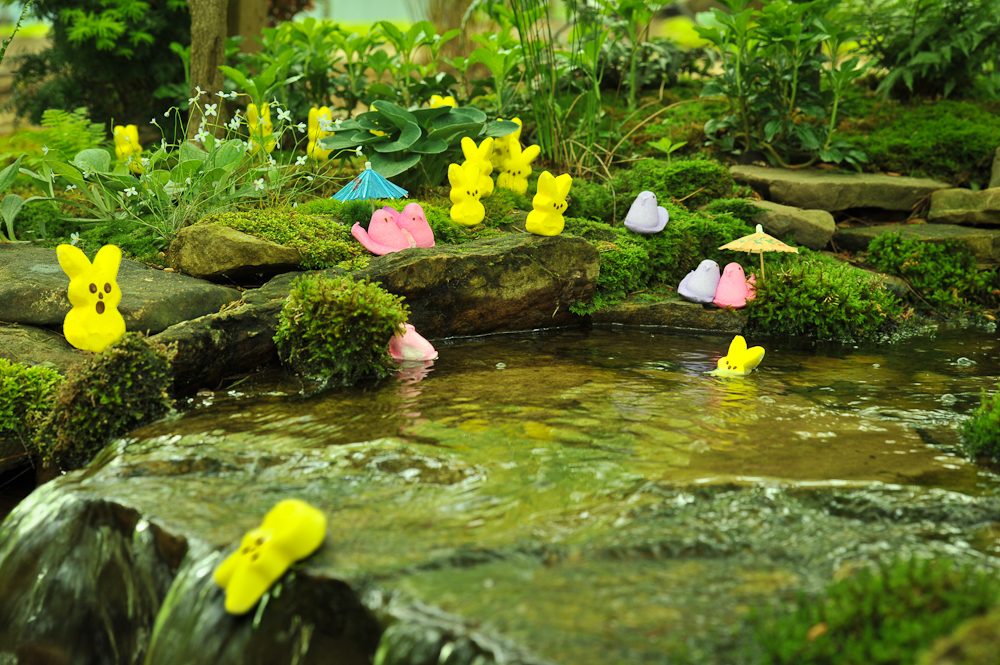 Gladys cannot believe her eyes.  This is not a good sign.  The very first to cleanse themselves, escape.  How many more will follow?

When this happened lasted year, three others followed suit.

Now she’s in trouble, The Learned Old Frog perks up from the commotion.  He knows full well what happened.  Those peeps!  Every year’s the same. 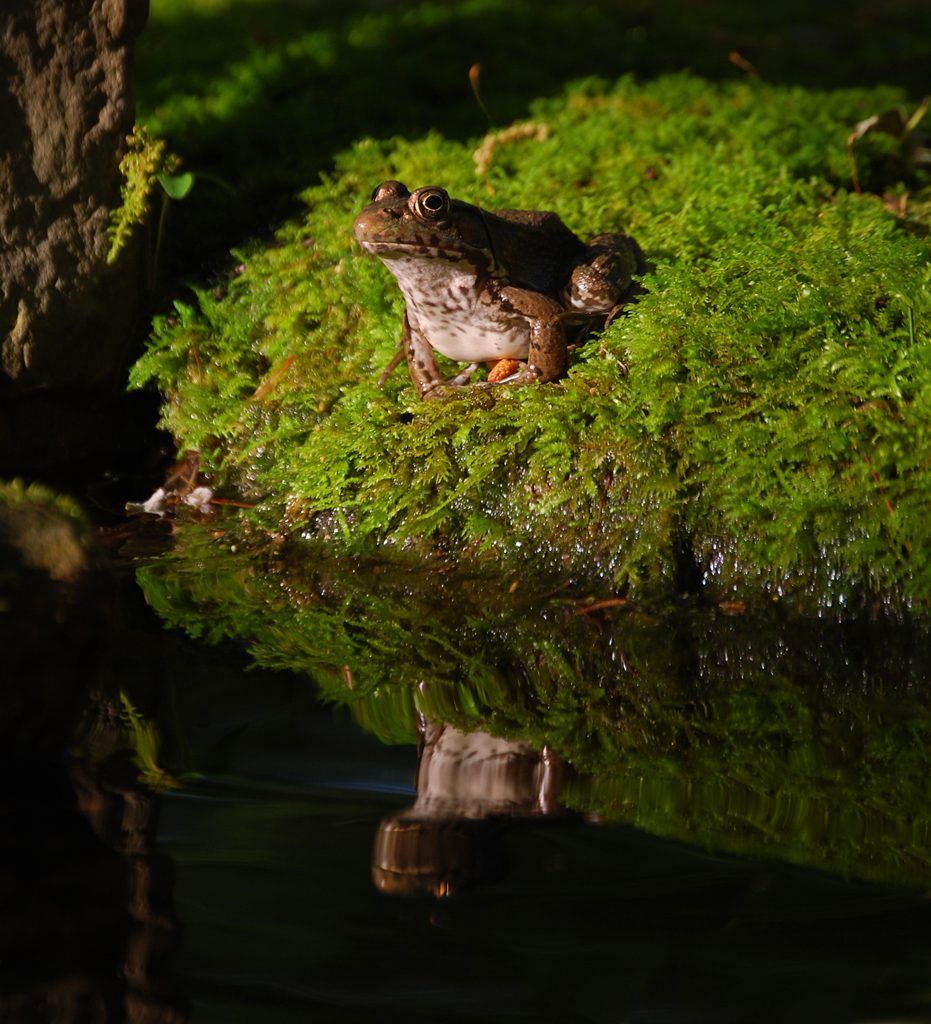 As The Learned Old Frog reflects on what just happen, he decides to do nothing.  After all, peeps will be peeps.