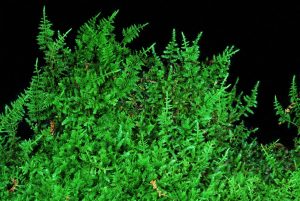 Anyone who has tried to start a moss lawn knows mosses are slow growing. Most people understand this, but many don’t understand why or just how slow is slow.

Mosses are very primitive plants without a higher evolved vascular system. They are limited to energy production by three factors: moisture, sunlight, and temperatures above 20 degrees Fahrenheit. If these three conditions are met, photosynthesis will produce the energy needed for growth. The energy produced is consumed but not stored for future growth. The only reserves that mosses have is a protein that allows for the repair of any cellular damage that may occur during desiccation. Upon hydration, the stored protein can repair the cell wall so that photosynthesis is again possible.

Mosses differ from vascular plants in that vascular ones may produce or consume energy under any number of different conditions–beyond the three factors limiting moss growth. Unlike mosses, vascular plants can store energy in their tissues, and continue to extract moisture and nutrients through their roots at night. You can water your wilted tomato plants after the sun has set and still have the benefit of that water perking her up. Mosses do not have this benefit; instead they have a simple on/off switch that allows their metabolism to produce and consume energy. If they are not producing or consuming energy, they become dormant.

While having the ability to be dormant or active within such a short period of time is an advantage, the disadvantage is not being able to extend your active period beyond the three strict factors. (We can, of course, provide the moisture if the other two factors are present and allow for growth. Learn about this in the next post.)

To obtain maximum growth from your moss, it should be moist as long as the sun is shining and the temperature is close to or above freezing, but, as always, we mustn’t generalize too much about such a large group of plants.

Now that we understand what it takes for mosses to grow, it is important to know about the different potential growth rates between the two types of mosses: pleurocarpous and acrocarpous. In general, pleurocarps can tolerate constant moisture, some even submerged, while most acrocarps must periodically dry out to prevent rotting.

Many carpeting pleurocarp mosses can be watered several times a day year-round, promoting growth that is on par with most evergreens. Their ever-branching and creeping horizontal habit will keep them expanding over new territory indefinitely. Under ideal conditions it is possible for the pleurocarps to double their size in 6 months. 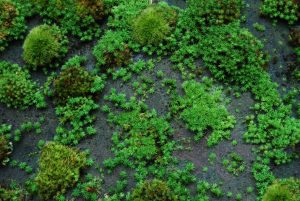 Acrocarps, however, cannot be accelerated past a certain point.  They are limited by their need to periodically dry out and their upright growth habit. You are more likely to have acrocarps spread over an area by their spores or fragments before the colony enlarges enough to double in size. Spores and broken leaf tips usually take 2 years under ideal circumstances to mature enough to be considered as “a carpet of moss.”

So there you have it, mosses take their sweet ole time to fill in. We can however give them a helping hand and significantly increase their growth rate and our goal of creating a moss garden by ensuring that the combination of their needs are met.