When And How To Water Moss 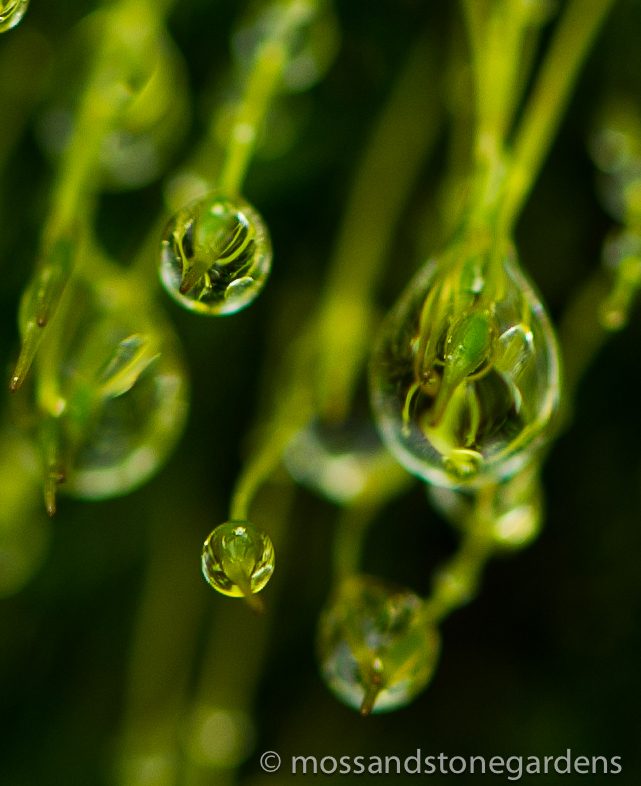 Pre-script:  Over the last month, Moss and Stone Gardens; has been sharing information about moss–understanding growth rates, preparing soils, how-to collect mosses, and this post about watering moss.  This series are actually steps in the process of creating a moss lawn. Each step leads up to presenting a thorough understanding for our ultimate goal of writing a how-to on creating a moss lawn.

The second step was Preparing Soils for Moss

The third step was How to Collect Moss.

WHEN AND HOW-TO WATER MOSS

Transplanted mosses to a new location need a period of time for the moss to acclimate and become established.

Acclimation is the process of the moss adjusting to the new location’s elements such as altitude, sunlight, water, wind, as well as the substrate the moss will be growing on.

Each of these will effect different mosses to greater or lesser degrees depending on the species, their growth rate and habit, which may increase or decrease depending on those changes.

Establishment occurs after acclimation to environmental differences and when new rhizomes have re-attached the colony to it’s new substrate.

To help with the establishment, the wisdom is to provide water frequently after the transplant, but how often and for how long is the question. This will be different depending on the the type of moss being transplanted. An acrocarp has different requirements than a pleurocarp.

Acrocarpous mosses are slower growing and will not tolerate constant moisture for periods longer than 2 or 3 months, if moisture persists they will begin to rot and eventually fail. They can benefit from a rainy season or regular irrigation once a year, but after that they will need regular dry spells.

If you are unsure whether your moss is an acrocarp, monitor its condition carefully. Look for signs of the moss turning dark and if there is a reduction in height. These signs will indicate that it’s getting too much water, and a break from frequent moisture is needed. 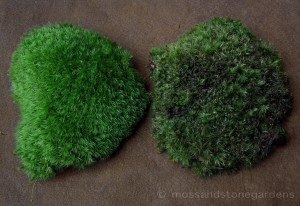 Below is a helpful watering chart for establishing acrocarps.

Months 1 and 2–-water daily for up to two months to promote growth.

Month 3–-water every three days for one month.

Month 4–-water once a week for one month.

Month 5–-water twice a month then until the area is fully covered in moss.

After that, water only when rain has been absent for three weeks or more.

Pleurocarpous mosses can be watered daily, and even up to 6 times a day in small volumes. This consistent moisture will keep pleurocarps growing year round, if the conditions are right.

The caveat for a frequent watering schedule is to be careful and not create the conditions for problems to form. Too much volume can create soggy conditions that may cause root rot for other plants. Be sure the delivery and timing of the water moistens the moss but does not soak the soil.

Molds, mildews and fungus can also cause problems for Pleurocarps.  When temperatures rise above 75 degrees, constant moisture can cause the development of molds, mildews or fungus. These may grow on the bare soils surrounding the mosses or directly on the moss itself. If any of these problems occur, allow the area to dry out completely and resume with a lower volume application of water.

After pleurocarpous mosses have filled in, and have become a thick and lush growth, watering can be reduced over time and allow rain to provide for the moss’s watering needs. If you are in an area with low rainfall levels, you may need to supplement during drought. Avoid creating a wet then dry cycle multiple times a day. The effect of drying out several times a day can produce a net loss in energy production.

HOW TO WATER MOSS

Watering using a hose and fine spray head is the most economical and accurate method for irrigation. Irrigation systems can also be used if they have the proper fine spray heads and are allowed to be scheduled. This usually requires a dedicated zone and programming. Hose end sprinklers are another possibility and can even be operated by a battery powered programable timer that attaches directly to the spigot.

If your water supply is from a well or a municipal system, you may want to have your water tested for chloramine or sulfur. High levels of each can have a negative impact on moss growth. You can also just water over a two month period to see if there is any negative effects. Using collected rain water will provide the best results over any other water source.

Since mosses must have sunlight in order to metabolize, the best time of day to water is early in the morning. Avoid watering your mosses close to dusk, so that they have time to accumulate net gains in their energy production.

Our next post will pull all this information together to learn how to Create a Moss Lawn.