Moss misconceptions abound. Is it true a rolling stone gathers no moss? To better understand moss, I asked Moss And Stone Gardens, to enlighten us with the truth about mosses, dispelling many common moss myths. 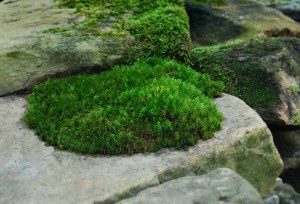 False –Most mosses are not particular about the pH or nutrients of the substrates on which they grow.

It would be more accurate to understand that mosses thrive where there is little or no competition, which often occurs in acidic and poor, compacted soils, or for that matter, on stone. 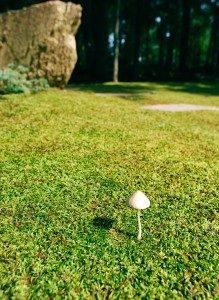 Moss only grows in the shade. True or False?

False –Mosses have the greatest range of light exposure than any other land plant.

This doesn’t mean that all mosses can tolerate sun, only certain species can. Mosses are found growing in all climates and exposures, from full blazing desert sun, to almost undetectable amounts of light found in caves. Mosses can also be found on all 7 continents. 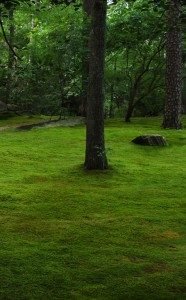 Moss only grows on the north side of trees. True and False?

False – Moss does grow on the north side of trees, and it also grows on the south, east, and west sides of trees, as well.

Moss may grow only on a north side of a tree if that’s the shadiest location as the sun tracks the sky. If there is something else providing shade (or moisture), the moss will grow in those places just as well.

Moss will invade my garden if I am growing moss on my property. True or False?


False – Moss spores are everywhere, even if there aren’t any mosses on your property. The spores travel on the wind to extreme distances, therefore proximity doesn’t mean density.

Moss will grow anywhere the conditions are appropriate for successful germination and can develop into a mature plant. 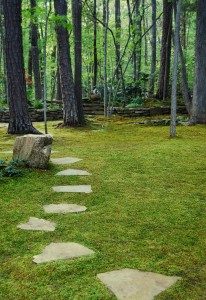 You can convert your moss-infested lawn into a moss lawn by letting nature take it’s course. True or False?

False – This is very unlikely to happen satisfactorily without intervention.

In most regions, the conditions necessary for moss to dominate vascular plants isn’t adequate. For example, in rain forests or areas like the Pacific Northwest, moss can over grow the under brush of existing plants; the abundant moisture gives the moss enough growing potential that it can blanket everything.

For other regions, something else needs to tip the scale in favor of the mosses, like abundant moisture, in this case I am referring to irrigation by man. To be more specific, one would have to water the moss lightly throughout the day in order to give it maximum growth potential, but not enough to give the existing plants (grasses, weeds) enough to sustain themselves.

Moss needs to be kept moist. True or False?

False – Despite this common impression, moss is actually one of the most drought tolerant plants. Also, there are a number of species that need regular periods of dryness to survive.

Mosses need moisture to reproduce sexually, but not asexually. Water is needed for photosynthesis, but not for survival. Moist areas allow for faster growth, but isn’t necessary for existence. Acrocarps mosses tend to be more drought tolerant than Pleurocarps.


False –The key here is not what substance will create moss in an area, but what allows moss to develop. The most important things to allow mosses to develop are moisture and lack of competition. Competition can be other plants, debris, or loose and irregular surfaces. Moisture is always needed to begin moss establishment. When mosses are beginning to colonize in an area, moisture is what allows the young mosses to perform photosynthesis, which in turn allows for growth.

Leaf litter, pine straw, twigs, loose stones, and such, make it harder for moss to find a stable substrate on which to attach. Moss prefers to have direct contact with whatever it is spreading onto; therefore, a smooth substrate will allow the mosses easier contact.

Mosses do not draw nutrients or sustenance from the substrates they are attached too; therefore, anything you apply to the substrate is not utilized by the moss since it does not have the root structure necessary to benefit from such applications. 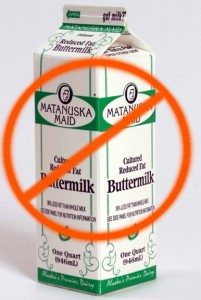 Blending moss and buttermilk into a slurry is the best way to grow moss. True or False?


False –Although widely reported to work effectively, this technique is usually met with failure and a moldy mess.

The best way to grow moss is by division of a colony or fragmentation, buttermilk is not needed. 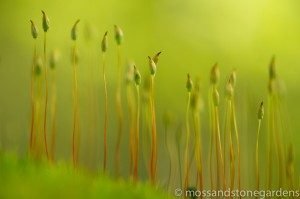 Moss spores will add to my seasonal allergies. True or False?


False –Moss spores may be as common as mold spores or pollen at times, but they are generally non-allergenic.

You can be allergic to anything, but the likelihood that moss or it’s spores will give you allergies, is extremely low. 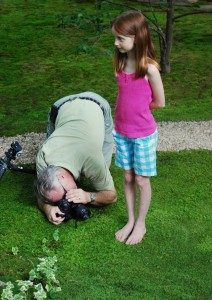 If you walk on moss, it will die.  True or False?

As a non vascular system, mosses don’t need protection from being compressed. With some foot traffic, their cellulose remains flexible, allowing mosses to be compressed without the kind of damage that occurs when vascular plants are trod on. The key difference is that their flexible structure and small scale are susceptible to breaking, if stretched. As such, walking flat-footed is greatly tolerated, while running or shuffling isn’t. 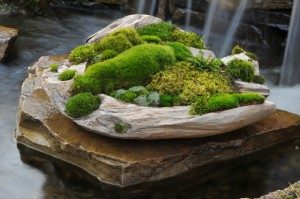 Moss is a parasitic plant. True or False?

False – When moss grows on trees, wood, or shingles, moss does not feed on the material it attaches to.

Mosses may keep substrates they are growing on damp for longer periods of time, and thus, this moisture retention is capable of deteriorating some non-living materials. 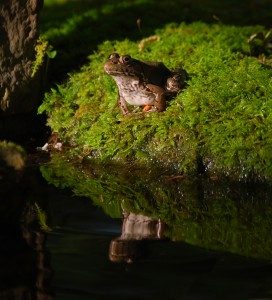 If you have moss growing on your property it means you also have molds. True or False?

False – The misconception that moss and molds are related isn’t true. Moss and molds are rarely found together, except when molds are attacking the moss as they might anything organic. With molds present, moss dies or decays, as does most anything else it attacks. If you have heathy moss, you do not have mold. 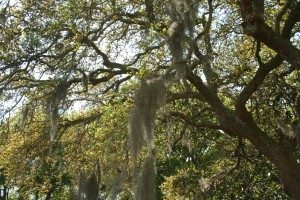 False – Including moss in the common name, does not mean it’s a true moss.

Spanish moss is an epiphyte, Reindeer moss is a lichen, club moss is a lycophyte, sea moss is an algae, Irish and Scotch mosses are vascular plants that look similar to mosses. 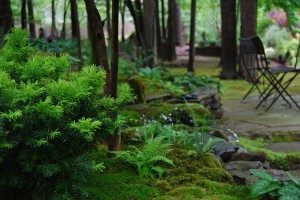 Growing moss is beneficial to my garden.  True or False?

True – Moss is a beneficial addition to the garden in many ways: it retains moisture content, similar to mulching, it is superior to mulches in that it is a living layer that processes nutrients and contributes organic material, it does not become compacted, and doesn’t need replacing annually, and it provides a healthy habitat for beneficial insects and promotes the evolutionary symbiosis of mycelium and plant roots. 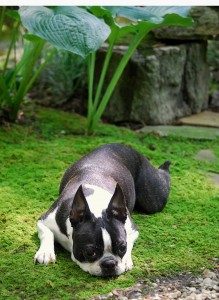 False – Ticks prefer tall plants, where they can perch to better position themselves to catch a ride on their next meal. Fleas don’t dwell in moss, and mosquitos need plants to provide shelter from wind and sun. Mosses are too short and dense to support resting mosquitos.

And finally, I needed to know — 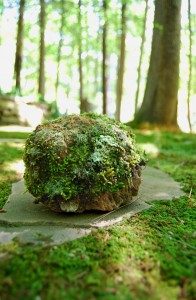 A rolling stone gathers no moss. True or False?

True – A rolling stone gathers no moss. If the stone is rolling, moss grows too slowly to get started on it and the friction of rolling would abrade or wear off any mosses that were on it.

There you have it! If you want to learn a truth about moss missed here, let us know!