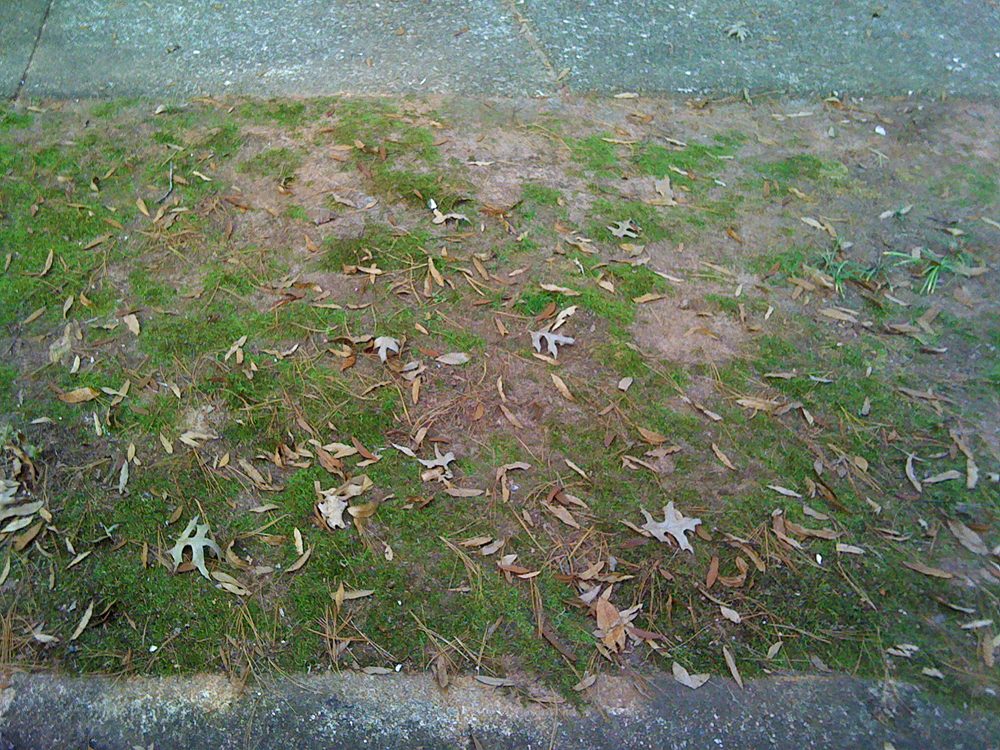 I live in Georgia and have moss growing naturally on the bare earth in front of my house. This strip of land, between the sidewalk and street, has always been a challenge.  Since moss is growing there on it’s own, what can I do to make it fully covered in moss? It’s never looked any better than it does now and I don’t want my neighbors thinking I haven’t tried or that I don’t care.

Thanks for your help.

What you‘ve describe is the way many a moss garden has come to be.   Mother nature gives us the hint that she has a solution to those tough areas with a really tough little plant — a plant she first used to cover the bare spots on earth when it was 450 million years younger.

The best way to develop a moss garden or moss carpet is to work with the existing native species that have already found the conditions appropriate.  Your species of moss, shown in the photo,  looks rather content, so it won’t need much time to make you and your neighbors happy enough to consider converting the whole street into a low maintenance parkway.

Before you begin to encourage further growth, you’ll need to spend a little time eliminating any weeds or grasses that are hanging on.  Hand weeding is rarely a welcomed chore, but it can have it’s zen moments, too.  To remove the weeds, use a sharp object or weeding tool to gently pry out the roots.  Doing this instead of pulling the weeds will ensure getting out the whole weed.

After you’ve cleared all vegetative competition, you should also remove small stones or other debris, such as fallen leaves.  Moss may eventually cover anything in it’s path, but first you must give the area the best advantages possible to speed up the process.

Once you’ve prepared the area, it’s all about the watering.  Remember moss only grows when it’s wet; if it goes dry, it will stop photosynthesis.   Moss is extremely drought tolerant.   When dry, moss doesn’t die, it simply goes dormant.   Moss’ ability to go extended periods without water, yet spring back to a growth state as soon as water and sunlight are present, is one of the many desirable traits of having a moss garden.

How often you need to water is best answered by how fast you want the moss to fill in. The optimal watering schedule would be to water lightly six times a day, beginning in the early morning and ending 2 hours before sunset (See our blog post here for further watering tips.)  Using this schedule should give the area in the photo full coverage within three months. If you were to water half as often or every other day, it would probably take six months.  Watering once every other day in the mornings will still produce the same results, but it will take longer to be full, lush, and resilient.

Water is the key ingredient for moss growth, but not for survival.  Deep watering has no benefit since moss is a non-vascular plant.  Surface watering is all that is needed.  Unlike grass,  moss does not have roots to collect water from the soil.   The amount of water needed to grow moss is far less than would be needed to grow grass in the same location.

For our clients, we recommend initially having moss gardens on a water mister systems, timed to come on frequently.  (More on that in a future post.)  Once the moss garden is established, this watering system can be removed.  When the moss garden has fully grown, the regular, frequent watering is no longer necessary and rainfall alone will provide what is needed.

Using this same watering technique, you can actually begin growing moss in areas with no visible moss growth.  There are moss spores sitting dormant everywhere.  If you apply water at regular intervals, the spores will germinate and colonize the area without ever having to introduce the moss on your own.

Good luck Becky and let me know what you and your neighbors think in three months when everything else is still brown except your parkway!

Next article New Year’s Gathering: Cobble Plus One – Party Rock