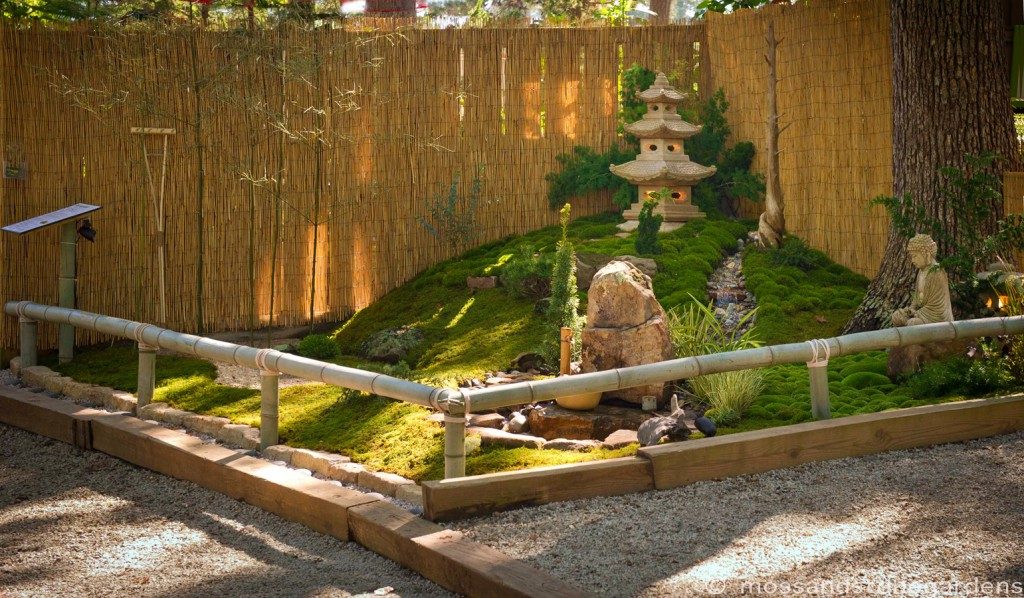 One of my favorite movies is Love Affair from 1939 starring Irene Dunne and Charles Boyer. It was remade as An Affair To Remember in 1957 with Deborah Kerr and Cary Grant and again as Love Affair in 1994 with Annette Bening and Warren Beatty. There is also the well known movie Sleepless In Seattle which borrowed heavily from this story’s plot line. Just like a really good story, some things can be revisited over and over again even though the similarities are obvious the freshness comes from the changing characters and contemporary elements. 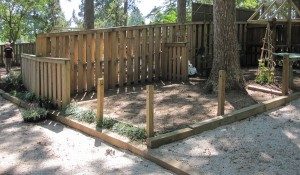 This year Moss And Stone Gardens was invited to create an exhibition at the NC State Fair. Erv Evans, affectionately known as The Plant Guy for his encyclopaedic knowledge of plants and their botanical names, is in charge of the Flower and Garden Show at the fair and when he made his enthusiasm known for our unique gardening style we could not resist.

The affair began with a visit to the garden grounds and a tour with Erv to see what locations were available. After consideration, Ken and I chose a corner booth anchored by a large White Oak. Little did we realize that this year was one of those off-the-chart acorn events that you seem to forget about until they occur again. By the time we broke ground 2 weeks before the Fair began, acorns were falling from the great oak at an astonishing rate and speed. Thousands fell into our booth and gave little if any warning before striking, if unlucky you became the stricken, if lucky you got to laugh at your partner getting a right painful lump on his noggin’. 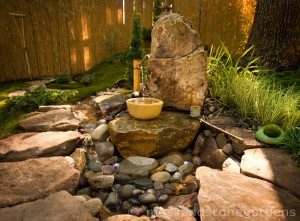 With some thought, it was decided to bring a little serenity to the energetic and colorful sea of blooms that enthralls the almost 1 million visitors that return each year. Hopefully, our exhibition would be seen as one of those contemporary elements that are welcomed in a recurring great storyline. We gave the installation the name The Serenity Garden and chose to use as many traditional Japanese style elements as we could tastefully squeeze into our 20′ x 15′ plot. The challenge was met by creating a 4 foot mound at the rear corner which allowed for some forced perspective. The temple on top of the hill and adjacent elements were kept to scale as though the distance from the viewer was greater than it actually was. 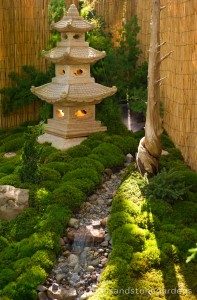 The stream that originated from behind the temple gained some added mystique with a fogging machine and the washed pebbles in the stream graded from 1/4″ all the way to 5″ as it approached the Tsukubai fountain.

At the base of the hill we nestled a dry water feature using screened gravel accented by bamboo and behind the fountain we added a Buddha statue to contemplate the peaceful setting.

As much fun as we had creating the Serenity Garden it paled in comparison to the joy we received by watching the flow of visitors stop and muse. For a moment, they stopped mouthing their cotton-candy or scanning ahead to see if the next attraction was more interesting, they pointed for others to not miss what caught their eye, took photographs, knelt down to caress the moss and most importantly came away with a new appreciation for one of the oldest stories ever told again and again, moss.

Next article Growing a Greener World