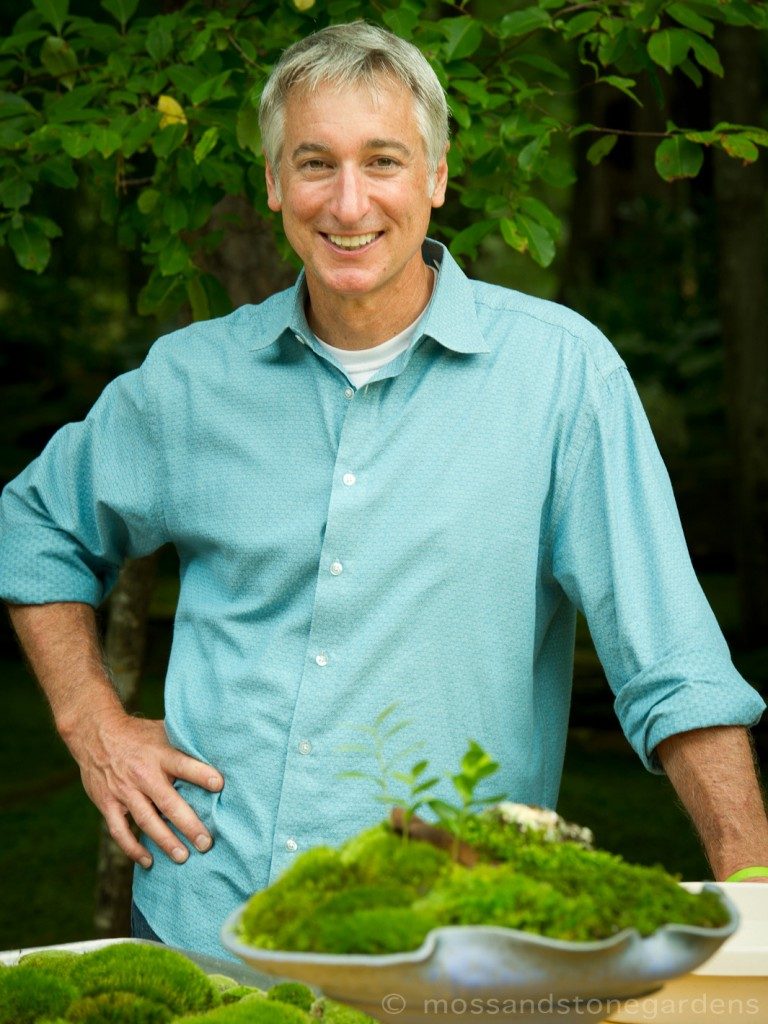 In June of 2012 Moss and Stone Gardens became the focus of a fantastic television series, Growing a Greener World. Hosted by Joe Lampl’ and broadcast nationally on PBS stations, GGWTV has become known for it’s appealling coverage of a broad range of interesting and topical green subjects. Beautifully filmed in high definition, it is a treat for the eyes as well as the soul. We were contacted by GGWTV’s co-executive producer and resident canning expert, Theresa Loe, expressing interest in learning more about mosses and the possibility of their inclusion for an upcoming show. After a few communications it was apparent that mosses and our work with them would have enough interest to become a full episode. Naturally we were thrilled with the aspect of another chance to share our message of mossy goodness with a national audience!

We awaited the arrival of Joe Lampl’ and the GGWTV team at our Moss Farm nursery with great anticipation. The visually stunning camera work that has become the trademark of GGWTV series was accomplished for our episode by the work of a very talented team of brothers, Carl Pennington and David Pennington. 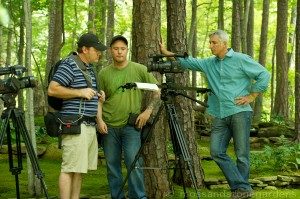 Together, Joe, Carl and David have traveled extensively to cover so many interesting topics and locations that to sit and talk with them is an adventure all it’s own. The few days that we spent together was an unforgettable experience and eye opening as to the demands of producing a high quality television series. I should mention that GGWTV is also comprised of other very talented personalities and team members which we didn’t have the opportunity to work with in person, such as the uber charming celebrity chef Nathan Lyon.  We did get to know some of the other great folks such as the previously mentioned Co-executive producer and chicken aficionado Theresa Loe as well as the existentially provocative Social media director Christa Hanson, both of which we adore and appreciate tremendously. 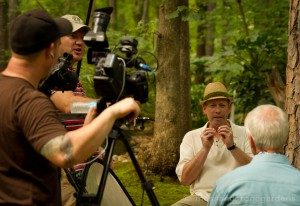 We began with a strategy meeting at sunrise – days always begin at sunrise when working with a television crew – and mapped out locations to film the script. We began filming rather quickly and wouldn’t you know it, I’m first up to bat with my close-up shots. Although not my first time on camera, I have to admit it was quite a challenge to condense my words within the framework of the script. Those of you who know me understand that I am not short-winded about my passion for moss! It was also hot as hades and impossible for me to not perspire. We were constantly running fans and wiping my face in between takes. I have to say that the patience of Joe, Carl and David in their determination to get the shot was phenomenal. Dealing with a sweaty, fumbling subject was only part of the ordeal as much of the challenge was constantly changing lighting and background noises.

After meticulous preparations we would be at the finish line of a segment only to have it interrupted by an amazing and seemingly determined variety of audio interlopers;  a plane overhead or a chainsaw or a car horn or a leaf blower or a lawn mower or a –I kid you not– crew of city workers with a bulldozer to clear a right-of-way at the bottom of our property!  Luckily for us they were PBS supporters and agreed to begin their clearing at the other end of the right-of-way. 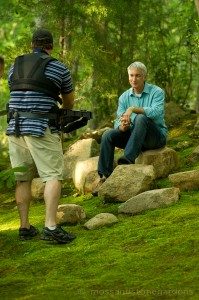 Interesting to see, was just how seamlessly Joe could move from off-camera to on-camera. I suppose that after so many years of hosting television programs Joe has developed that skill but it is also apparent, watching him work, that  he is a natural talent. The really kind and enthusiastic person you see on the screen is what Joe is like in real life, but for that to be felt and seen by viewers, he also taps into his ease with the camera and keen focus on the subject matter. So what may look casual when edited and shown over a half hour program was really a grueling sun-up to sun-down schedule of scene set-up and shoots over a sweltering three and a half days.  Not once did I see Joe with even a bead of perspiration! That twit! Oh, did I type that out loud?! 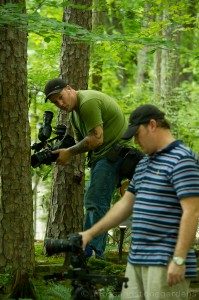 Ken and I were fascinated by Carl and David’s expertise with the visual and audio recording of the events.  Obviously they are pros and it shows. Both Ken and I relate very well to the challenges of documenting our work with mosses but these guys were also capturing sound. Their commitment to high quality audio was very rigorous to accomplish and constituted most of the demands of the time needed for the shoot. We became attuned to the ambient sounds during filming but mostly kept an eye on David as he listened through his headphones. By the last day of shooting I could sense an approaching sound violation by the slight cocking of David’s head as the microphone picked up the earliest vibrations detectable to his trained ear. 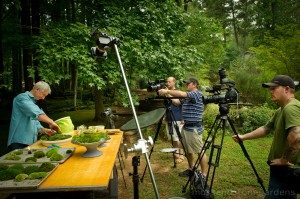 Needless to say, all the work to make this episode happen was worth it and, thanks to Joe and his crew, we are one step closer to giving mosses their due and taking them off the list of weeds to spray with herbicides. With topics like this being examined on quality programs we can all learn how to work towards growing a greener world.

Visit Growing a Greener World’s website to see the Moss Gardens episode #319 from season 3 or look up your local listings and find when it airs on your local PBS station. While your there, be sure to check out all the other amazing episodes and connect with the GGWTV team and joe gardeners’ from around the world through their Facebook page.

Next article Plants With Benefits