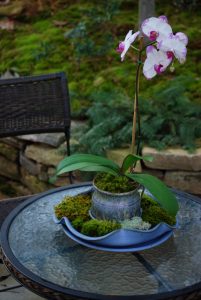 Phalaenopsis blooms rise high above a commissioned pottery piece by Marsha Owen.  A beautiful work of art that can be used inside as a centerpiece on the dining room table or in the foyer as a fresh welcome home. Set this dish garden next to the bed for a soothing sight while waiting for the light to wane from evening to night.  During the warm summer months, this moss and orchid dish garden could be admired outdoors.

We wanted an orchid container that used moss as  a living plant not as a dried up, deceased, dressing.  Paired with orchids, moss is treated most often as a mulch not as a living plant.  Wanting to combine moss and an orchid as living species, I was inspired to create a container that allowed the two to be displayed together, but with both kept alive.

The clever design is a ring to combine a living moss dish garden with an orchid (or another plant); one that possess  separate containers, allowing for different watering and soil conditions.

When designing your orchid container, considering adding live mulch to keep the composition fresh and alive.