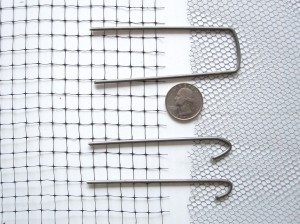 The squirrels have been digging up my attempts to grow a moss lawn.  What do you suggest?  I have so many unpleasant thoughts about ways to eat the squirrel.

I feel your pain. squirrels can be a troublesome animal in a garden.

There are several approaches to deter squirrels, and other moss meddling critters; you may need to incorporate one or more, to be effective. Once the problem is under control, the squirrel and other critter populations seems to remember the areas they are unwelcome.

The first line of defense is with netting. This technique is effective and is left in place permanently.

Using 3/8″ grid netting, (see above) sold as pond netting, you cut to size and cover the area being disturbed, pin down using landscape staples. I recommend cutting the staples and modifying the cut end into a hook. This is easier to install and it gives you twice the number of pins for the same price.

Start by pinning the edges, then pin the netting in the middle, especially where the terrain is lower and the netting is lifting above the surface. Contour the netting to the moss, making as much contact as possible. The netting will practically disappear after installation and the moss will grow through, and incorporate the netting into, the colony. This technique is also used to hold down newly transplanted mosses and in particular where water run-off or a slope is present.

I have also used a material called tulle which is used for wedding veils and such. It can be purchased at any fabric store. There are several weaves and the best is a 1/8″ size double threaded in matt black. Although not as strong as the pond netting, it’s more effective against birds. The installation technique, and it’s being left in place, is the same as with the pond netting.

The third option is again using the pond netting, but the netting is suspended 4 to 5 inches above the moss. This height range makes it difficult for the squirrel to get under or climb on top and push it down to gain access to the ground. I make stakes from non-pressure treated wood about 8 to 10 inches in length to stretch the netting from and allow the ends of the netting to drape down at the edges. Obviously this is an eyesore and temporary, but some squirrels are attracted to a specific area and will chew through anything even metal to access  their favorite spots. I have seen squirrels return to an area over and over, tearing up the moss and digging for their bounty. This method seems to be enough of an agitation to deal with persistent visitors.

I have also had success using animal repellent products, such as i must garden either by itself, or in conjunction, with the above methods.

I hope this information helps.