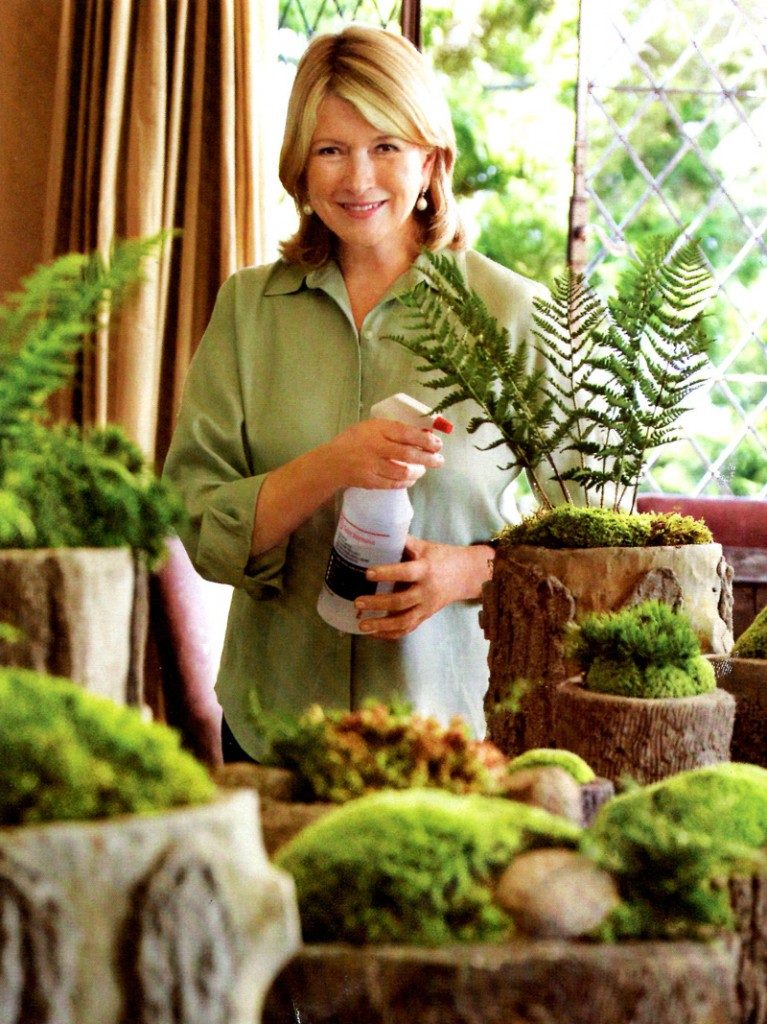 There has been a marked trend towards moss within the past year. As homeowners look to less maintenance and more environmentally friendly practices, mosses for a shady spot are the epitome of green. With few demands, moss, once established, rarely needs watering, needs no fertilization, plus it will eventually knit together, suppressing weeds. 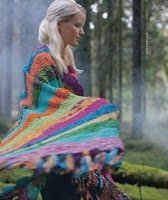 When a power house like Anthropologie, a leader in new mythologies, uses a mossgarden as their backdrop for entire catalogue (December, 2010), you know moss is trending.  The catalogue is so popular, it can be bought on eBay. 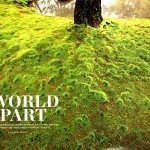 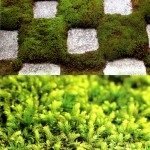 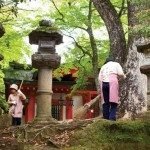 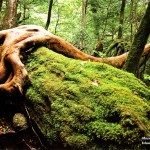 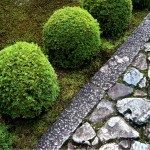 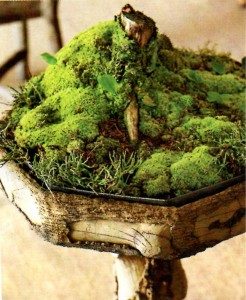 Martha Stewart has had a long love affair with moss and in the August 2011 issue of Martha Stewart Living magazine, Martha features a nice story on moss dish gardens. 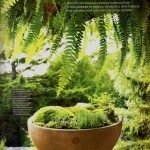 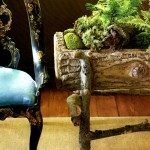 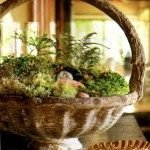 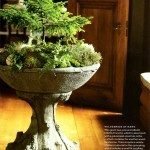 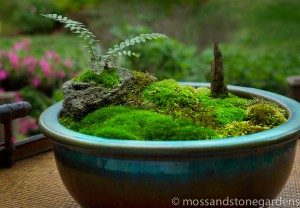 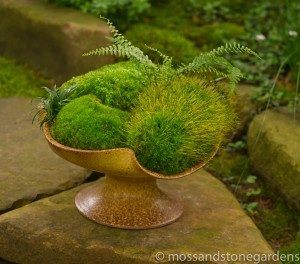 Most mosses prefer a moist, shady location with a commonly held belief that they require an acid pH range between 5.0 to 5.5.  According to Moss And Stone Gardens, “I have dispelled the common adage that mosses prefer an acidic soil in the 5.0 to 5.5 range. Moss is often found growing on acidic substrates, and  this is often noted as an indication of their preference for that pH range. It is more correct to say that other plants don’t prefer pH levels of 5.0 to 5.5, therefore acidic soils promote less competition, thereby allowing moss colonization. Most mosses will colonize a much wider range of pH than other plants since they do not draw nutrients from substrates, their need for a certain pH range is overstated. (example: I have mosses growing happily on potting soil.)” 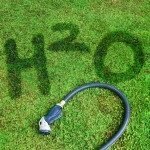 Although most mosses prefer shady woodland settings, there are others that like a range of climates from Bryum argenteum growing in the cracks of sidewalks, Tortulla muralis found in desert regions, and Camplylopus introflexus growing in coastal regions.
Rhizoids, not roots, are what attaches moss to the ground. Because mosses have no roots, amending the substrate isn’t necessary; moss will grow on compacted soil, even clay.

As a nonvascular plant, so primitive they get what they need from the environment — moisture from the boundary layer of the soil, rain, dew, and even fog; nutrients and water move from cell to cell by osmosis. During times of drought, mosses go dormant.

As a lawn replacement for shady locations, as the ground cover in a woodland garden, or even used in decorative dish gardens, mosses are gracing more home gardens today than ever before.

Mosses come in both clumping (Acrocarpous) and spreading (Pleurocarpous) forms.

For lawns, the spreading forms, or the Pleurocarps, are generally recommended for their ability to a form a seamless carpet. Hypnum imponens (sheet moss), Plagiomnium cuspidatum (woodsy mnium), Thuidium delecatulum (fern moss) are good choices for shady lawn replacement and for sunnier areas, Entodon seductrix. These have low profiles, producing spreading, fast growing colonies, and a prostrate habit. Adding more than one species is recommended to increase the chances of a moss liking it’s location, forming a dominate colony.

The clumping forms, or the Acrocarps, are generally recommended for borders, as living mulch between plants or under trees — in areas where their quilting, mounding, three dimensional effect can be appreciated. 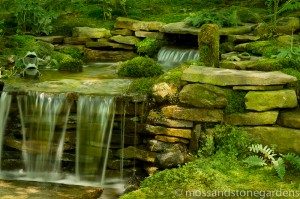 In spite of a preference for moist sites, we can encourage mosses to colonize in places that aren’t naturally moist, by lightly irrigating the area to allow for colonization. Once established, mosses don’t need irrigation. Keeping them irrigated will hasten the growth process and add intrigue, watching various mosses vie for fiefdom.

Mosses’ tiny leaves are vulnerable in that they don’t have the waxy cuticles of vascular plants, absorbing rain or dew directly on the leaf surface. Mosses convert sunlight into energy, using chlorophyll, but because moss is on such a small scale, even the tiniest leaf can inhibit their potential. As such, keep mossy areas free of long standing debris.

As a young plant, while mosses are establishing, it’s recommended to weed by hand, carefully removing a young weed so as not to disturb the colony. 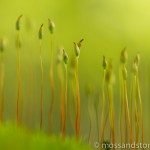 Mosses reproduce through spores and leaf fragmentation. Spore season is one of the most magical times in a moss garden. Getting low to see a stand of moss spores is a rewarding moment, engaging even the most studied moss experts.

In planning a design, know that moss gardens tolerate occasional foot traffic; moss is not as delicate as they look. However, in areas of frequent traffic, stepping stones are recommended.

Adding moss to your garden, being green as it was in the beginning, will garner you a new perspective, making what is old, new again.

The Ins and Outs of Moss

At Moss And Stone Gardens, we are often asked about the type of containers best used for growing moss.  As you consider the container or substrate selection for your moss dish, please keep the following in mind.

From Moss And Stone Gardens

Even though mosses don’t have a root system to draw nutrients or liquids from substrates they are growing on, they are still capable of conduction. This means that direct contact with moisture, which is also in contact with a substrate or material, can transmit dissolved particles to the moss. One of the things mosses are sensitive to is heavy metals and some chemicals.

I have observed a healthy and spreading carpet of moss, stop in its tracks, as it approaches the drip line of a deck constructed with pressure treated wood. When water comes into contact with the pressure treated wood, some of the chromated copper arsenic will leach into the water and be dispersed. This will have negative effects on any moss that is in contact with this contaminated water.

To investigate further, mosses living on top of soil that is in a pressure treated planter will fair better than ones planted at the foot of the same container. They are buffered by the soil and basically, upstream from the water that contacts the  pressure treated wood.

It is also possible to have soil in a zinc coated container with mosses growing on the soil, but there will certainly be a zone of peril where soil stops and zinc begins.

In a container using an inappropriate material for mosses, good draining soil and drainage holes would be essential to keep the mosses downstream of contaminants.

Damage to mosses from zinc or pressure treated wood may not be visible for weeks or more depending on the species, water volume, and contamination levels, the metabolism rates of mosses are very slow and so visual evidence of damage takes time.

In summary, it’s best to stay on the safe side and use what’s in for moss — plastics, ceramics, seasoned concrete, stone, wood, soil, fabric, or glass and avoid what’s out for moss – galvanized or zinc plated metals, copper, pressure treated lumber, chemically unstable materials.

Next article Moss Rocks! ROCKED the IGC Show in Chicago