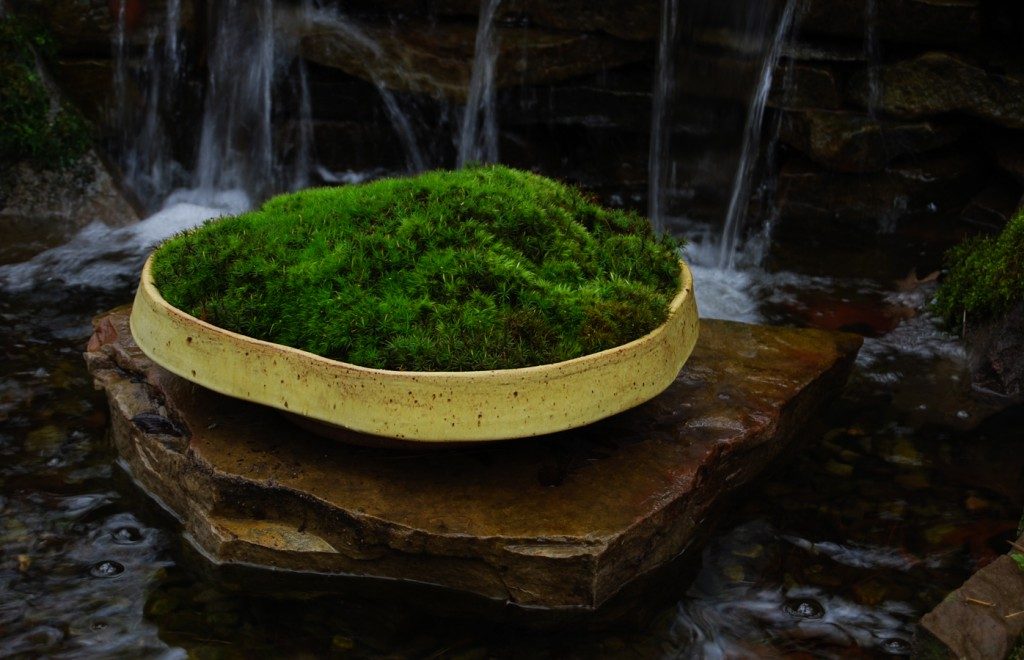 As if butter and nutmeg were blended on stone, molded, then spread with lush, emerald green moss, this dish is worthy of a nosh.

David Spain’s Mellow Yellow dish came about by the proverbial, cart before the horse, philosophy.

Typically, David will let a piece of pottery move him to create moss landscapes as art in the shallow well of pottery or crevices of stone.

In creating of this piece, David was moved first by the moss. “I had a particularly beautiful colony of Polytrichum commune and Dicranum scoparium that were evenly mixed together,” says David.

Recognizing the rarity of these two mosses in such a large colony combined as one, David commissioned Marsha Owen Pottery to make this mellow, yellow pottery dish.

“As a moss cultivator, I am always looking for exceptional specimens and as this mixed colony developed, I knew I wanted to showcase the fusion of species and their exceptional size,” says David.

David carried the colony to Marsha’s studio where they made a cardboard template of the colony’s footprint. David says, “I asked Marsha to come up with a simple, elegant container to house this voluptuous mixture and I was not disappointed.”

Careful consideration was needed in making this pottery fit the moss colony. As pottery is fired, there is shrinkage. Allowing for this, Marsha and her husband Rick, carefully constructed the container, so once fired, the moss colony would fit exactly.

At first glance, this moss dish may seem to be lacking the detail of a micro-landscape David is so well known for; however, to David, “This dish epitomized the simple beauty of a moss dish garden.”

As ever, photographer, Ken Gergle, masterfully photographed this dish garden, Mellow Yellow. Often, Ken leaves the scale of the art a mystery. When I learn of the scale of some of David’s pieces, I often equate it to adding the last wiggly-shaped piece to a 500 piece puzzle, as Country Dish revealed.

So while Mellow Yellow, may only be made of two mosses, Polytrichum commune and Dicranum scoparium, it measures 22 inches across or about the size of my mondo computer screen or that of my first born at birth. Indeed, this is impressive.

In the wild, a colony of this breadth takes about 20 plus years to develop. David was able to grow this colony in just four years using the optimal conditions at Moss and Stone Garden’s moss nursery.

Mellow Yellow is a permanent part of David Spain’s personal collection; “I am happy to report, for five months, the colony housed in Mellow Yellow, has a healthy formation of sporophytes, signifying it’s content in it’s uniquely crafted sanctuary.”

For many more months, and perhaps years to come, I hope to learn of Mellow Yellow’s continued contentment.

Next article The Peeps Picnic at The Moss Farm – Spring 2011