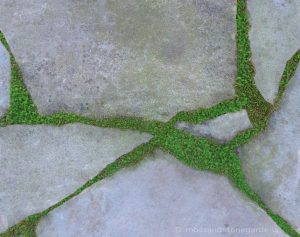 Your blog is the funniest and most creative thing I have seen in a while!

I have a very shady area that stays too moist for grass and I want to use flagstone with moss growing between the stone to create a natural patio. How long will it take to get moss growing?  The spaces are planned to be about one to two inches wide.

Growing moss between dry-set flagstone, in a shady area, is a natural combination. In a few years, some moisture, and  you’ll be good to go.

As with any mosscaping, our desire is to speed up the very slow process. Transplanting mosses into the spaces between the stones and following a regular watering schedule can establish healthy colonies in a few months.

Be sure to use pleurocarps and a soil substrate between the stones, especially if the stones were set in sand or stone dust. Even though mosses can eventually colonize a sandy substrate, it is usually after many years of detritus collecting and compaction before the mosses can overcome the shifting of the loose sandy substrate.

Mosses often colonize in harsh conditions where other plants find it difficult, which is why they have survived on this earth for so long. A small strip of soil in a sea of stone or concrete has become the expected home for mosses and where most of us recognize them. However, This natural combination usually occurs over many years or decades while we aren’t watching. Achieving this feat successfully can be as challenging as creating a moss lawn. The little micro-climate created between stones can provide shelter, but also rapidly changing moisture conditions, so pay close attention to a frequent watering schedule to insure the best chances of establishment.

As always with moss, patience is a necessity and even if it looks like some of the moss has gone south, continue to treat it as though it hasn’t. It only takes a few spores or living cells for mosses to regenerate as long as there is moisture to allow for growth.