How To Collect Moss

Mosses can be collected by scooping, scraping, or raking. The technique for collection depends on the type of moss–acrocarp or pleurocarp 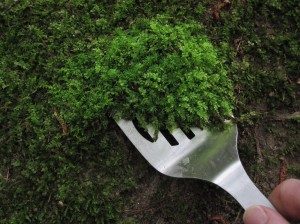 Acrocarps are best collected by scooping after a rainfall. First, clean any loose debris and weed the moss as much as possible before collecting. Once the moss is disturbed and removed from it’s original location, it’s more difficult to remove debris and vascular plants. Slide a mason’s trowel, BBQ spatula, or any flat-bladed hand tool underneath a moss colony to collect a thin layer of soil along with a patch of moss, preserving the rhizomes and the integrity of the colony.

Work in sections about the size of the palm of your hand or as large as you can transport without damage. These moss colonies can then be re-located intact or divided and nestled back into the soil to re-establish in a new location.

Frequent watering will speed up the re-establishment process. For acrocarps, begin with a greater frequency of watering then decreasing over time: 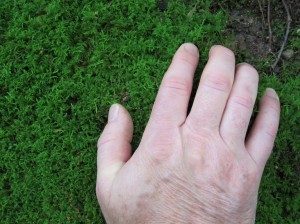 Pleurocarps can be collected by scooping, scraping, or raking.

To scoop, collect pleurocarps like you would acrocarps, cutting the soil just under the colony and transplanting the colony whole (with soil) to a new location.

To scrape or pull the mosses from the soil, cut at the top of the soil level or work the moss away from the soil with your hands. A lateral pushing and pulling motion will loosen or break the rhizomes and allow the mosses to be removed from the soil.  This technique is similar to giving someone a back massage where the palms of your hands are flat on top of the moss and you are pressing down.  Slowly push and pull, keeping the contact between your hands and the moss to loosen and break the rhizomes that are holding the moss in place. With your fingertips, work your way around the area until it is loose, tearing an edge to allow you to gently peel it up. Scraping should also be done when the moss is wet.

This will also allow you to collect the moss without any soil, lessening the weight for transport, thus increasing your chances of keeping the colony section whole. The moss section can then be transplanted to the new substrate for establishment. Collecting mosses in this fashion is also helpful when moving them from a fallen tree and then onto soil or other substrate when you intend to fragment into smaller pieces. 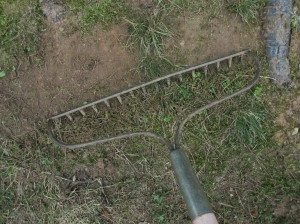 Raking the mosses can also be used to remove moss from areas where they are mixed with weeds and grasses. By raking the mosses, you can leave the root-anchored plants behind and collect the mosses in fragments. This technique is best done when the moss is dry. It may also be helpful to agitate the moss with your finger tips until the fragments are free. 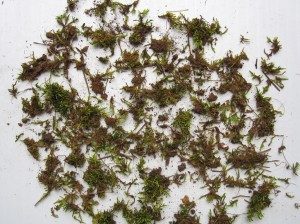 Spread the moss fragments into a prepared area and water frequently to establish new rhizome anchors. Pleurocarpous mosses can be watered daily to encourage establishment and spreading. It is not necessary to reduce the frequency as you would with acrocarps.