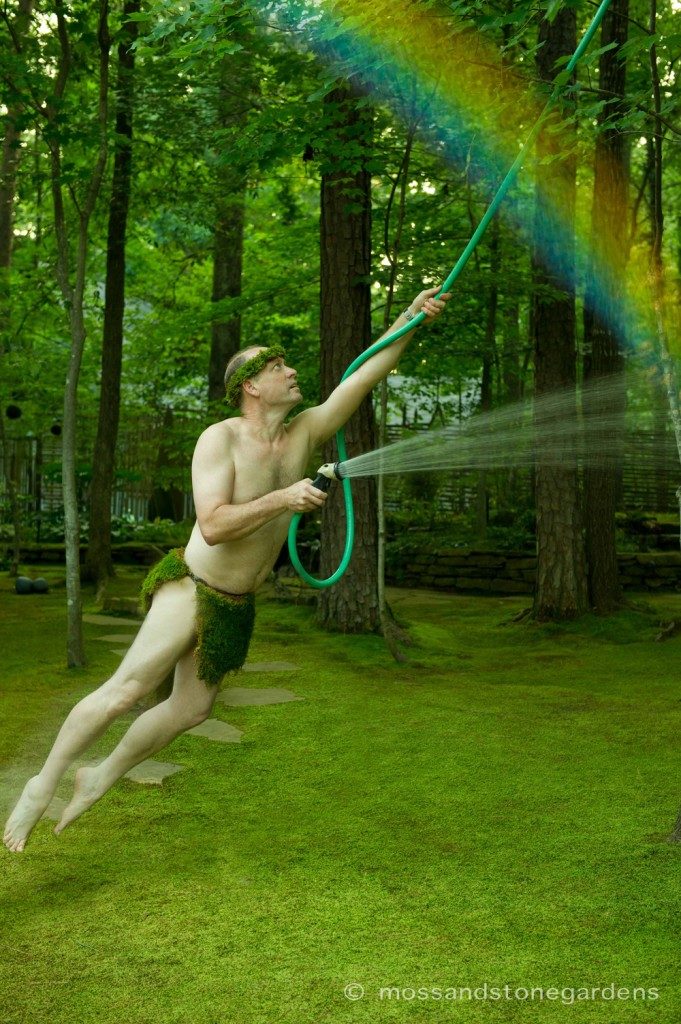 The most common question I receive about moss gardening is from people who have decided to give up on their grass lawn in shady areas where naturally occurring mosses have crept in. They ask, “How do I eliminate the remaining grass?”

After attempting to grow a lawn in shade, only to fail in producing a satisfying amount of coverage to fulfill the ideal, frustration leads to an alternative–moss. Converting a grass lawn to moss where traditional attempts of growing turf were used; annual seeding, adding lime, selective herbicides, and watering are one of the most difficult scenarios to work with.

The mosses move in forming verdant green islands and showcasing their evergreen appeal. The homeowner begins to realize Mother Nature may be revealing a better plant for this location. At this point, the homeowner is typically pleased. Even if they can’t grow the grass they hoped for, the fascination that moss wants to grow offers them salvation. 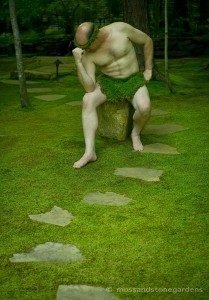 Soon the moss is anointed and all the efforts to coax the grass is removed from the homeowners list of chores. The moss however proves stubborn and seems unwilling to hold up to the occupation of its newly bequeathed territory.

Then the question comes, “How do I remove the existing grass and get the moss to take over?” My standard answer underwhelms as I explain that it’s best to remove the grass by hand and water regularly. This is then followed by a plea, “Isn’t there some kind of chemical that I can apply?”

Many of us have become accustomed to gardening and cultivating our landscapes with the help of sprays and chemical controls. It’s a hard habit to break, potions line up like soldiers at the local stores to do the job once held by our sweaty hands. We want and expect to have an easy remedy in the form of a spray to rid dandelions, crabgrass, nut sedge, broad leaf weeds, and even moss (ouch). Pulling grasses and digging with a weeding tool seems like an impossible task for large areas, but tackled systematically it is manageable, and the least disturbing method that capitalizes on any gains the mosses have made.

Here are a few suggestions to create a moss lawn and to deal with a grass to moss conversion.

1.   Where there is nothing–a clean slate

If you have an area where there is no vegetation, you are beginning with a clean slate. This is usually due to leaves and debris that have been allowed to cover the ground and prevent any plants from accessing the soil. The leaf litter can be removed and the area prepared soils for mosses.

You can also create a clean slate by applying a thick layer of leaf litter and allowing it to do the work of clearing any vegetation for you over several months. For a quicker approach, vegetation can be removed manually using a flat shovel.

Beginning with a clean slate is often the best way to promote a self-sustaining and weed resistant moss lawn.

After the area is prepared for moss,  locate and transplant from your surrounding area placing patches of colonies directly on the prepared soil. Fragmenting the colonies will increase the coverage but also the time needed for establishment. After installation be sure to water deeply and step on the mosses to ensure direct contact between the mosses and the soil.

Begin a structured watering regiment  and keep the area debris free. A pre-emergent such as Preen Vegetable Garden Weed Preventer can be used to prohibit weeds from geminating.

Alternatively you can follow these steps but not introduce mosses and allow airborne spores to develop into a selection of mosses that suit the conditions. In about 3 months you will begin to see what looks like a green coloring on the surface of the compacted soil. This is the early stage of moss growth and it will develop into a moss lawn in 12 to 24 months.

2.  Where there are equal amounts of weeds and moss–join Team Moss

Join team moss and say goodbye to team grass. Every advantage given your new team will help turn the tide from grass (and weeds) to moss.

Capitalize on established patches of moss, encouraging their domination by removing competition (grass, weeds and debris) and using appropriate watering techniques.Carefully hand pull grasses and weeds, ensuring to get the roots.

If your weeds overwhelmingly outnumber the moss, place leaf litter or black plastic over the area. This will block sunlight and starve the vascular grasses and weeds. The mosses will tolerate this for a longer period of time than the grass and weeds, thus killing the unwanted growth while maintaining most of the moss.  Check the progress every couple of weeks until the vascular plants have died.

3.  Temporarily remove and store the moss–divide and conquer 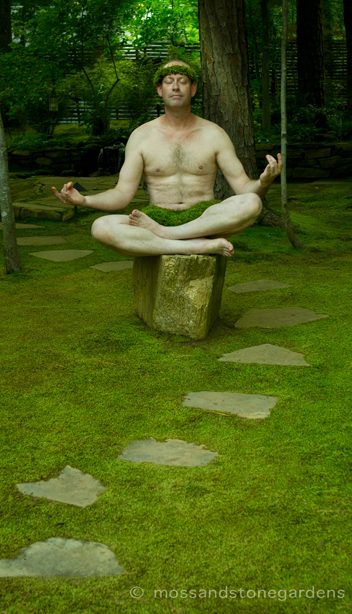 Create a clean slate by temporarily removing the mosses. Think of it as taking your new moss buddies for a vacation while you do some spring cleaning. Collect all the mosses and store them off to the side for a couple of weeks.

Larger patches can be collected as a whole and sparsely covered areas raked out. Set the mosses aside in a shady location, laying out the patches and piling up the loose bits that were raked in a shady location. You should water the stored mosses daily and they will keep this way for a couple of weeks, if needed.

4.  Apply herbicides—give in to temptation

If your volunteering mosses are  pleurocarps, applying herbicides has fair odds of working.  If they are acrocarps it is not advisable. On a dry warm sunny day, lightly mist the mosses with water, do this slowly on one area then another and repeat. Give the mosses time to absorb as much water as possible. Then allow the leaves of the grasses and weeds to air dry. The mosses will retain the moisture but the waxy leaves of the weeds and grasses will not. Apply a rainproof glyphosate, carefully aiming for the intended targets but avoiding a heavy application. A half strength mixture may even be enough to kill most invaders and reduce moss damage.

After the required drying time for the glyphosate, water the mosses again. After any damage to the mosses has healed, you can repeat the application. By watering the mosses and fully hydrating their cells before applying the glyphosate, the absorption rate is minimized. Watering afterwards will help further dilute any remaining chemicals.

Even though the herbicides may be easier, don’t try to accomplish this too quickly or in one application. It is also wise to test this technique on a small area first to check for success.