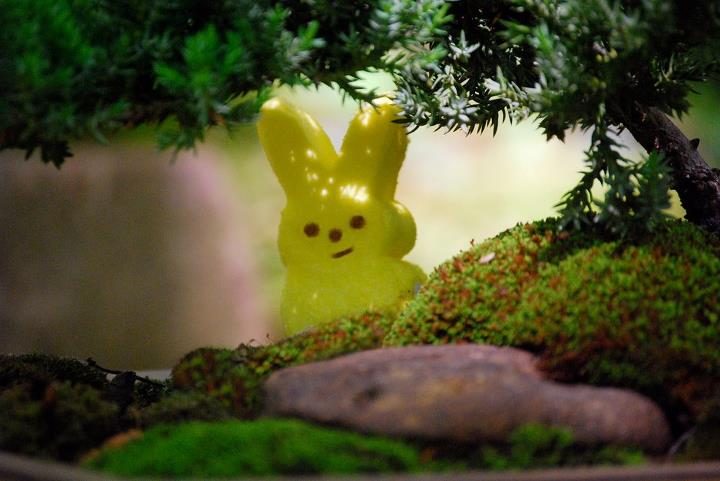 Hi it’s me, Bernard.  I’m in my new role serving as part of the advance team for this year’s Peep Picnic.  I’m here because, as you may have read on our host’s Facebook page — Moss and Stone Gardens – Where Moss Rocks!, there was a Peep sighting prior to the after Easter pilgrimage.  This was what was reported:

….this just in… the first Peep sighting at The Moss Farm this year! Soon the Peeps will be gathering for their annual Spring Revival. The day after Easter marks their pilgrimage to begin building up their population again for next year. We can’t wait to see who returns and what will happen at this years Peeps Picnic!

You may notice from reading the above we downplayed the early arrival; it is safe to say we put our own spin on the sighting.

It was also reported, This morning a mossaic design was found at The Moss Farm.  It was obviously created by a very high intelligence or some mosstical power. What could this mean? 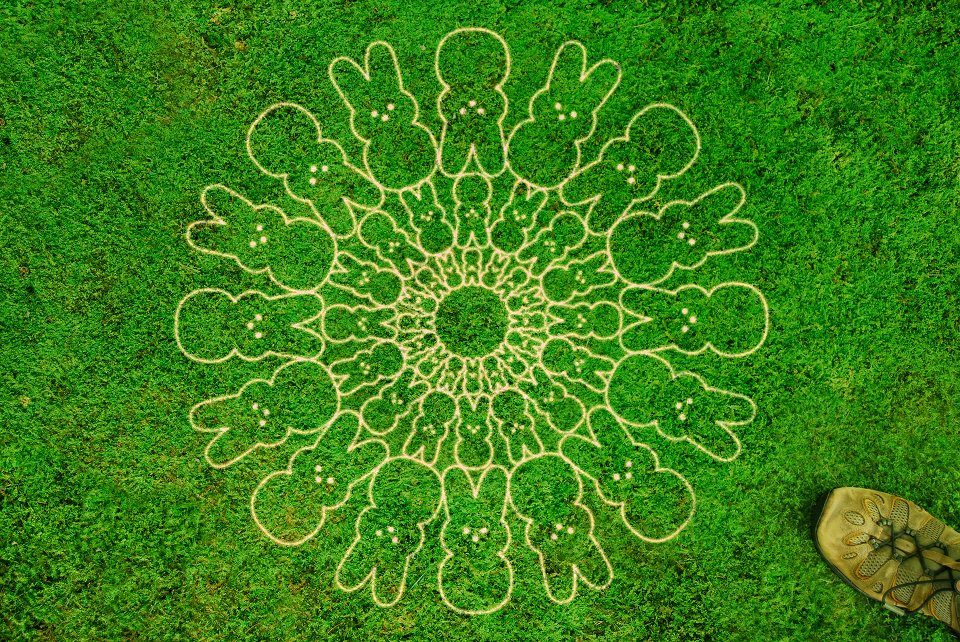 The Learned Old Frog called for this procedural change of an advance team to be formed once the mystery of the Hop Circle showed up.

It turns out those ducks were good for something after all. In their continual effort to “impress”(suck up to) The Learned Old Frog so they could be considered a world wonder, they let the leader know what happened.  Our wise counsel immediately knew what to do.

Forming an advance team, The Learned Old Frog asked me to oversee the mission.

My two best P-men, Pake and Plywood, were the first on the scene. As reported on the Facebook page:

We can’t say for sure what the events of yesterday mean, the Peep Circle or code name, The Hop Circle, was first thought to be a close encounter of the PEEPS® kind or the  Faeries playing a little joke on the returning Peeps.

The Learned Old Frog wanted answers to this mystery before the Peeps started to arrive.

In the meantime, the White House released a statement announcing President Obama authorized a covert mission redacting an unnamed suspect and delivering them to the newly formed Peeptanamo detention camp. The unnamed suspect is believed to be involved with the mysterious appearance of a Crop Circle that formed at The Moss Farm last Tuesday night.  Quick action was taken believing it could be another Roswell. 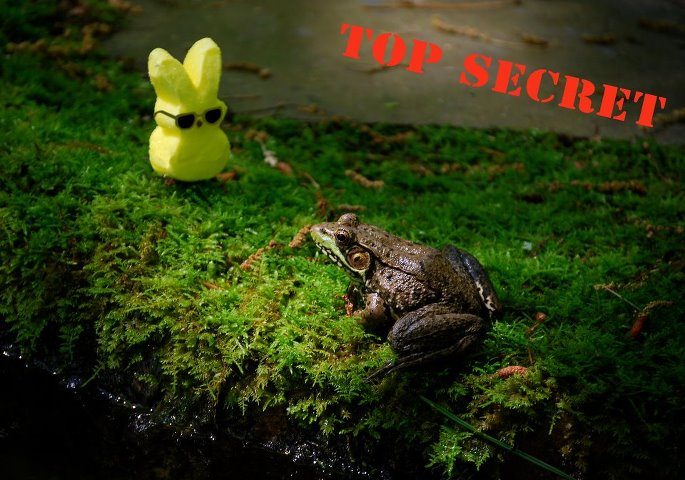 This photo was released Friday by Wikileaks. It shows a rarely seen P-Man interviewing a resident at The Moss Farm.

If you followed the tales of the Peeps at last year’s picnic, you may recall there was a little, ahem, indiscretion between Luther and Nettie. Feel free to take a moment to re-read the accounts of last’s years picnic. When you are caught up, grab a toadstool and let me share with you what happened since we reported last.

Toward the end of the 2011 Peeps Picnic, Luther and Nettie, with love in their hearts and erect ears, were last seen taking matters into their own hands escaping down the falls so they could couple.  We later learned they made it to Mellow Yellow, a well known rogue coupling site. 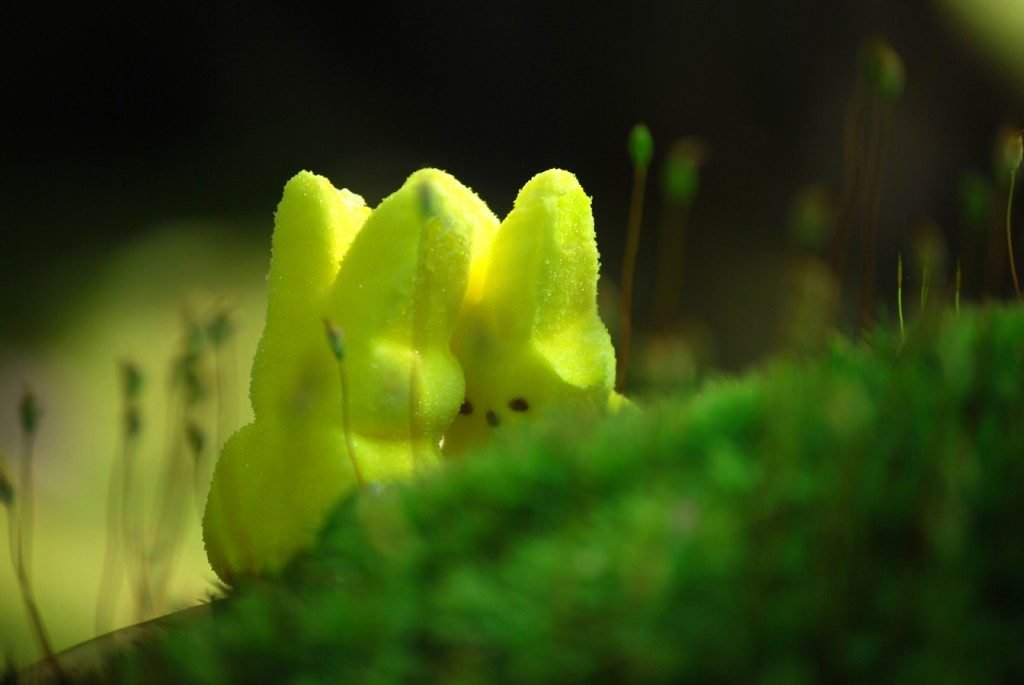 We also learned The Learned Old Frog, originally turning a blind eye to the whole affair, later thought better of it.  He was afraid it would be viewed by others as an OK to go against the long held tradition of assigned coupling.

Luther and Nettie’s punishment was no further coupling (with anyone) during their three-month stay. After this time, Nettie and Luther were brought back into the fold and were able to offer themselves for sacrifice for Easter next year.

And so the story goes, Luther was packaged up but Nettie wasn’t needed.  However, there was an interesting turn of events. Instead of being eaten, Luther was part of a package that had a hole it.  When the humans got home and realized it, they threw the Peeps in the trash. Luther decided to run for it.

It wasn’t easy getting out of the house with the dog nipping at his tail but Luther managed to get away. 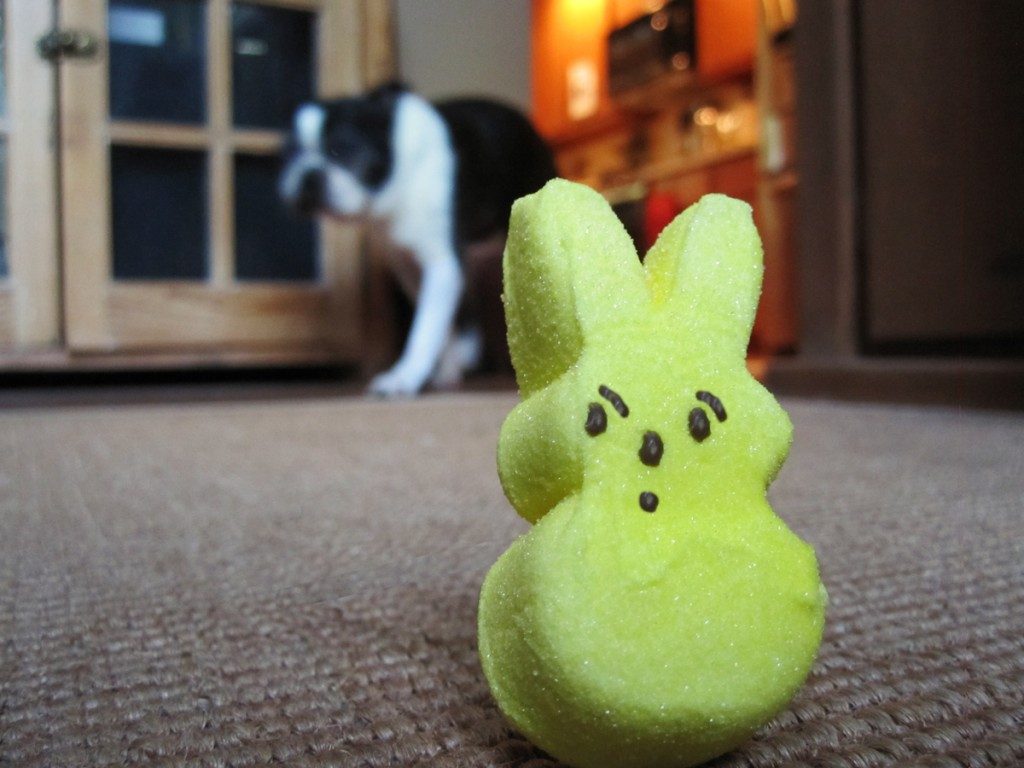 Hitching a ride was easy. Being a Peep has it’s advantages to easily opening doors. 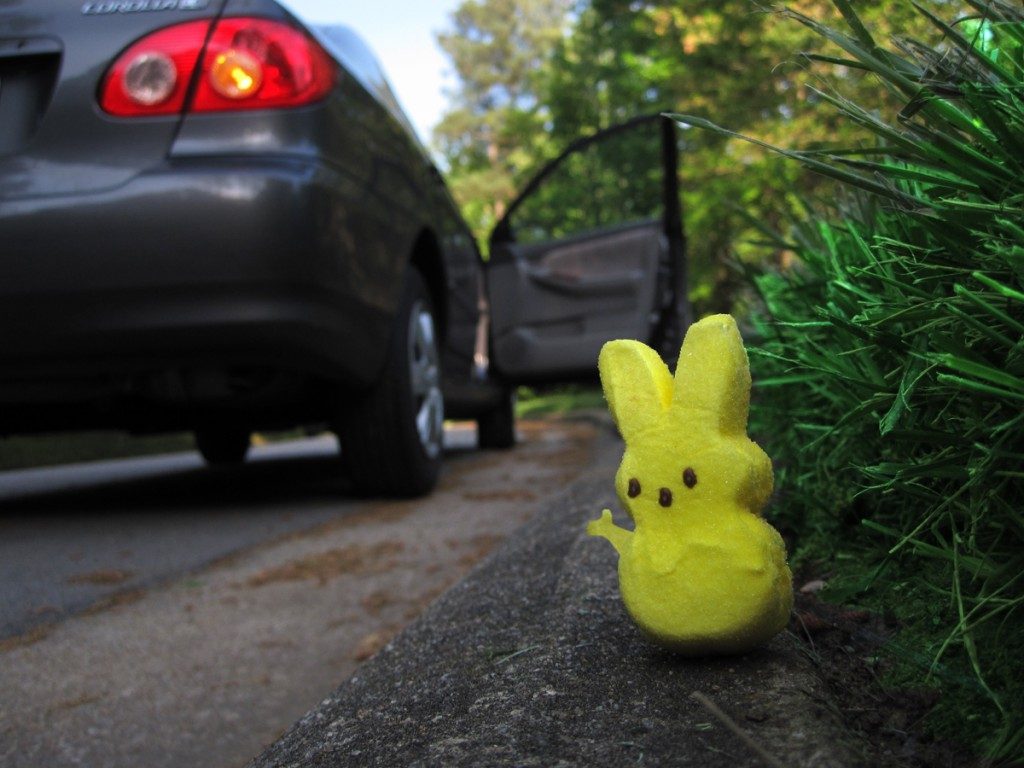 Luther spent the year traveling the globe touring of the 8 wonders of the world.  During his journey,  he hooked up with a traveling gnome, Larky and together they got into all types of shenanigans. Luther and Larky decided to do a little mosschief and come to The Moss Farm early to create the Hop Circles before the gathering. 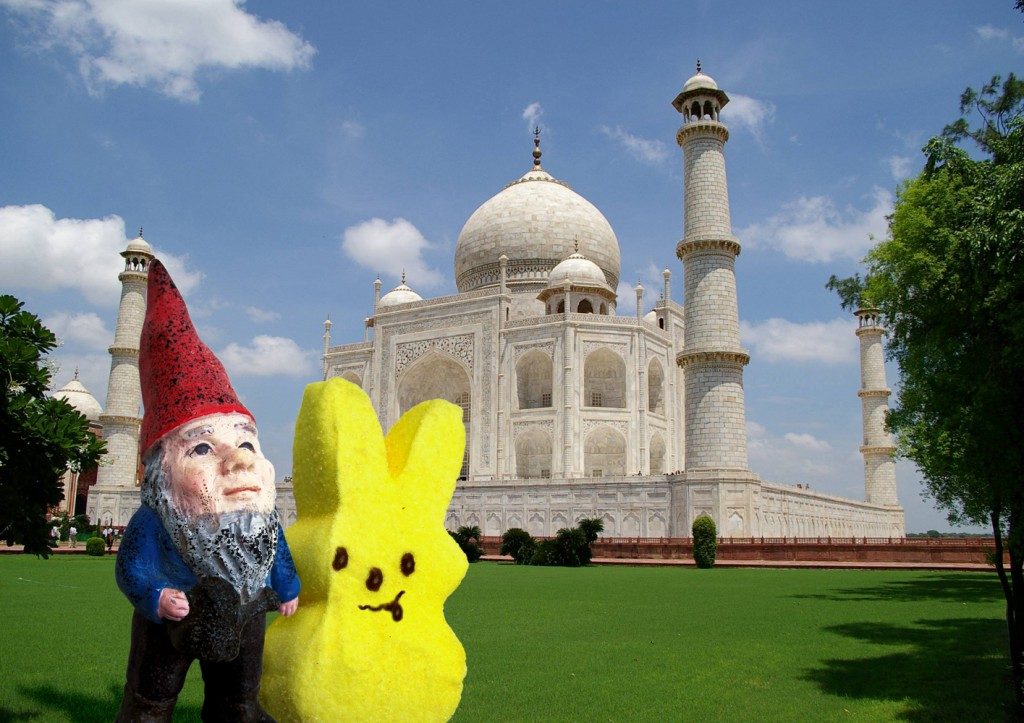 Little did Luther and Larky know but the nature of their prank was on the radar of the the Human Government. They take these circles very seriously.

I have it on good authority the government knows who is behind crop circles. As soon as one is viewed from a space satellite, action is taken.  They took Luther into custody for fear he was really the offender who had transformed himself into a Peep. 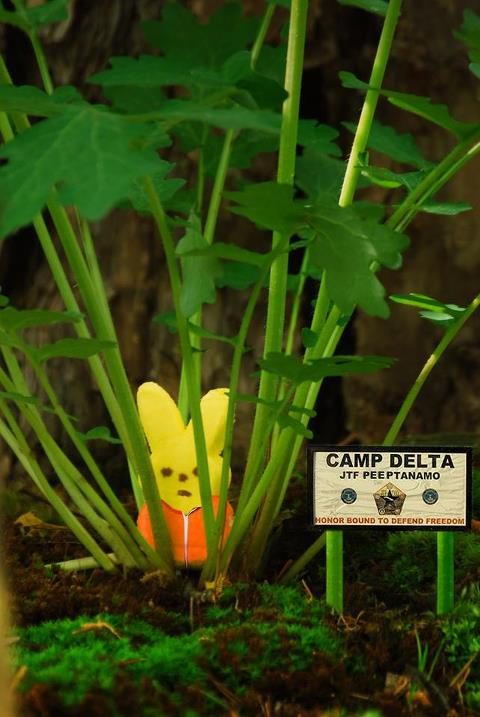 Larky the gnome was horrified his friend was detained.  He immediately called The Learned One telling him of Luther’s fate, who then responded by calling in the P-Team to the rescue.

If these two parallel forces were not taking place at the same time, the Hop Circles would have been a fun welcome home to all the happy Peeps.

Learned Old Frog knew Luther had arrived early and that he brought a friend.  This is why he sent me in early in the first place.  He also knew that this was the sort of thing Luther was capable of.  What puzzled The Learned One was how it came to be that Luther returned.  He personally saw him being packaged!

At first The Learned One tried to work with the government but he was not to be believed.  As such, The Learned Old Frog had to take measures into his own hands.  This would involve a jail break.  Peeptanamo was no place for Luther.

The Learned Old Frog brought out his special peep forces known as PEEPSTERS (Peeps Everywhere Eagerly Prepared [to] Save Team [members with] Exactly [the] Right String).  There was no stopping them.

As they were making their escape, the Human SEALs (Sea, Air, and Land Teams) brought out the heavy equipment.  But the PEEPSTERS and Luther escaped! 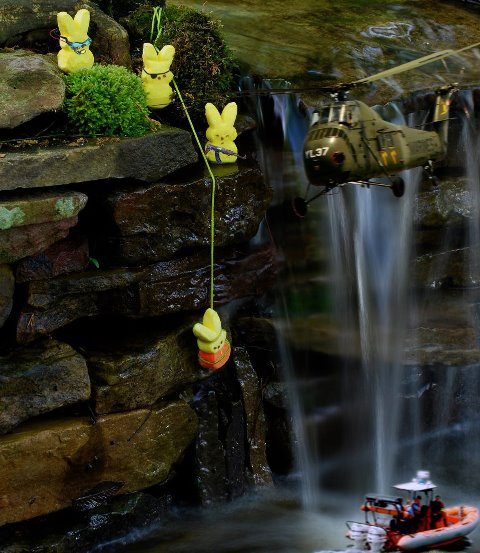 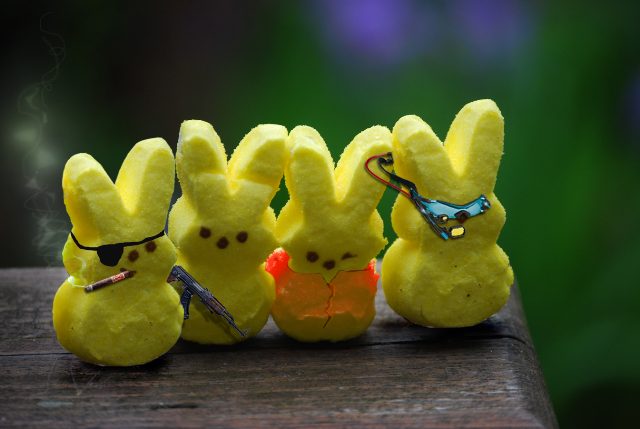 The P-team, known as PEEPSTERS, took Luther to a safe house until a decision about his future was made.

In the meantime, The Learned Old Frog met with President Obama to explain that what appeared to be crop circles were really Hop Circles and that Luther was indeed the one behind their making along with his gnome pal, Larky.

So we waited and waited until we heard the decision from The Learned Old Frog and President Obama. It was all cleared up; thank goodpeepness!  The P-team and Luther will be Pardoned.

After the decision was handed down, I was able to have a quiet chat with President Obama.  I shared with him the story of Luther and Nettie and Luther’s heroic escape in the face of being wrongly accused. Mr. Obama was justly moved. He decided to not only pardon Luther and the P-team, but all the Peeps who ever coupled freely.  This historic decision, overruling the Learned Old Frog, has been dubbed the Hunger Decision.

With the pardon, these Peeps will be able to honorably return to The Moss Farm. 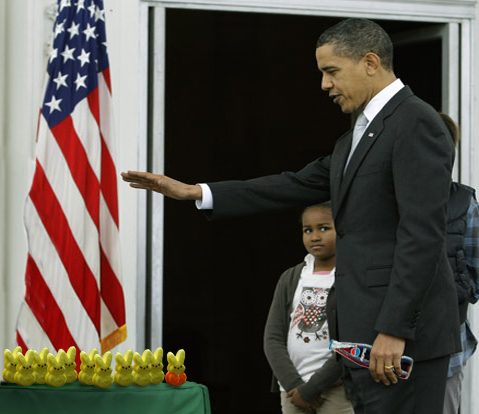 Jay Carney, White House Press secretary declined being  interviewed about the incident, which in some circles is being referred to as Peepgate.  Insiders believe Mr. Carney is not happy with President Obama’s decision to pardon the Peeps.  It is rumored Mr. Carney thinks the Peeps should be punished to the fullest extent of the law.

From our Peep perspective, sometimes the truth is hard to swallow, especially when it’s a marshmallow.

BACK ON THE FARM

All the Peeps at The Moss Farm rejoiced when they heard the news that Luther and the other Peeps had been pardoned.  Now we anxiously await the arrival of these pardoned Peeps. There seems there has been some delay though…we’re starting to get a little worried. I hope every thing is OK.

As Bernard turns in for the evening, he turns on the television.  President Obama’s decision to pardon all the Peeps who freely coupled made national news.  Still, Mr. Carney refuses to be interviewed and seems to be angry when questioned about his harshness against the Peeps.  Mr. Carney was last seen leaving the White House picking a little piece of something orange from his teeth. 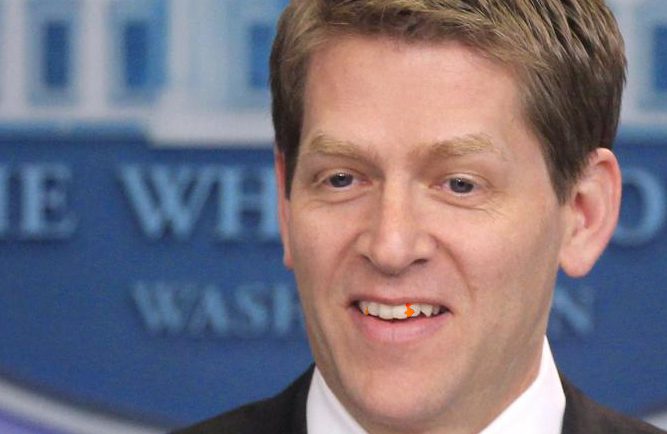