Ageing Moss In My Moss Lawn 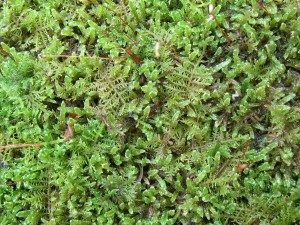 A blend of Thuidium delecatulum and Hypnum cupressiforme

For the past 6 years I have been slowly replacing my grass lawn by encouraging the native mosses in my yard to grow. I have successfully replaced about 75% of my lawn with a lush moss carpet. Unfortunately I’ve began to notice that the oldest mosses have grown so thick (about 3-4″ deep) that they’re starting to die off. Not only do they appear to be suffocating their own annual new growth, but they’re no longer established or attached to the soil (I can lift the moss up like sod). I fear that I may have to tear out this moss and start all over – are there any better solutions?

Congratulations on your lawn conversion!

Mature moss colonies continue to gain in thickness as you described. This is natural and self limiting as the older growth becomes smothered and breaks down, creating soil.

When large areas are carpeted, the colonies no longer have access to new territory to spread into, it is the growing edge that has access to soils where rhizomes can attach. Instead, the colony attaches to itself and forms this mat even though direct attachment to the soil isn’t possible, the interconnected mosses hold together and gravity does the rest.

This fact should not be a concern unless animals or some other disturbance is causing dislocation. You can thin the mosses out to encourage new attachment by pulling up a section, removing some of the under-layer moss and stretching the colony out, as though you were going to pull it apart but stopping before it tears completely. This is the same technique to harvest mature colonies and transplant them to new areas, only in this case you can put them back in the same place.

Another technique is to pull a 4 to 6 inch section out with your hands, exposing the soil beneath, then pull the edges of the moss left behind to partially cover the bare area. Water the area well and walk the feathered moss down to make good contact with the soil. New rhizomes will form and the bare spot will regenerate quickly. If done properly, you may not even notice this was done.

As for the mosses starting to die off or the new growth suffocating, that is a different matter. Mosses continually regenerate adding new growth to old, new shoots should not be effected by the previous generations in an adverse way, this is the natural course for acrocarp and pleurocarp mosses alike. Instead I might suggest a different take. When we create a somewhat unnatural growth of mosses by removing normal competition and promoting an homogeneous  carpet, we are also changing the natural cycle. A different approach is to introduce more than one species for a mixed moss lawn. For instance, Thuidium delecatulum can be mixed with Hypnum cuppressiforme or Plagiomnium cuspidatum. Each species will wax and wain at different times of the year, but one will always be thriving. This blending has proven to be the most resilient over the years and offers advantages that a single species cannot. Try introducing some different moss species and see if that doesn’t help with the problem. 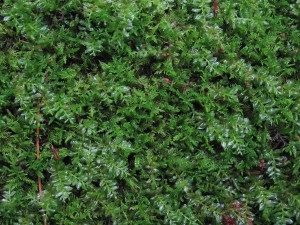